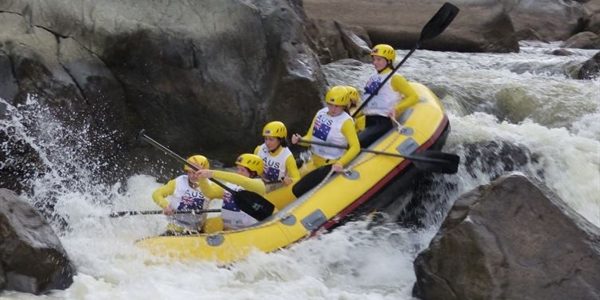 MEMBER for Leichhardt Warren Entsch MP has promoted the “incredible” efforts of Cairns’ Under 19 White Water Rafting girls team in Parliament in the lead-up to the World Championships in Indonesia.

“One year ago, five schoolgirls from Cairns beat teams from Brazil and Russia to win the World Championship in Under 19 White Water Rafting,” said Mr Entsch.

“These girls are incredible – I had the pleasure of meeting them last year when they returned from Brazil. Their dedication was impressive – not just to get to the competition, but to train and fundraise beforehand.”

Mr Entsch said the team leaves Cairns on Friday 27 November and, in Indonesia, will face a quick-timed sprint challenge, a physical knock-out head-to-head, a technical slalom course and a downriver marathon event.

“There’s no doubt that this is an extreme sport,” he said, “the girls are continually at the top of their game to avoid flipping, being caught under rocks and in dangerous currents.

“Safety is always first, but good teamwork and communication is paramount when making split-second decisions. Their success is evidence of this, as well as the guidance of their coach, Wagner Torres.

“I wish the girls all the best in bringing the World Championship back to Cairns.”