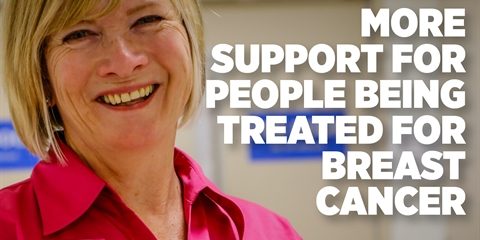 Breast cancer is estimated to be the third most commonly diagnosed cancer and the most common cancer for Australian women.

It currently affects one in eight Australian women before the age of 85. This year, it is estimated that more than 16,000 people will be diagnosed – over 15,900 women and 150 men.

The Government’s commitment of $20.5 million over four years from 2017-18 will fund up to 57 of the McGrath Foundation’s nurse positions in approximately 55 locations across the country, with most of these working in regional and rural communities.

Mr Entsch said a Commonwealth-funded McGrath Breast Care Nurse was already based in Cairns but the four-year extension of funding will enable her to continue to provide physical, psychological and emotional support to people diagnosed with breast cancer.

“The support these nurses provide isn’t just to the patients, but also to their families and carers ? starting from diagnosis and continuing throughout their treatment,” Mr Entsch said.

“The role they play in a patient’s treatment journey involves them acting as the main liaison between the patients and the specialists who coordinate their treatment; a role that I know is invaluable during a very difficult time in a patient’s life.”

Since 2013, Commonwealth-funded McGrath Breast Care Nurses have supported around 15,000 Australians and their families.

This new four-year extension to the Government’s previous funding agreement with the McGrath Foundation of $18.5 million will ensure this valuable support and coordination of care continues for patients with breast cancer.

This announcement is in addition to the Turnbull Government’s 2015 listing of Pharmaceutical Benefits Scheme (PBS) medications for secondary breast cancer: pertuzumab (Perjeta®), trastuzumab (Herceptin®) and trastuzumab emtansine (Kadcyla®) for HER2-positive metastatic breast cancer. Without Government subsidy these medicines would cost consumers more than $82,700 per person each year to access.

Last month the Government also listed Tamoxifen (Nolvadex-D) on the PBS as a treatment to reduce the risk of breast cancer in women identified with a moderate to high lifetime risk of developing breast cancer.