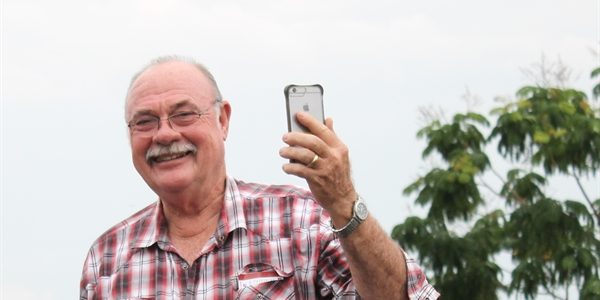 SPEEWAH residents are celebrating after their new mobile phone tower was turned on earlier this week, drastically improving reception in the regional community near Kuranda.

The new tower was funded under Round 1 of the Federal Government’s Mobile Black Spot Programme in conjunction with Telstra, with Leichhardt MP Warren Entsch crediting the very high level of community advocacy for the successful outcome.

“I think it was a bit of a surprise for us all when it was turned on at 2.30pm on Monday but I’m told that the community is extremely excited now that it’s up and running,” Mr Entsch said.

“My first call was to Bob Madden, Chair of the Speewah District Residents Association. I’ve been on this journey with Bob since 1996 – he was one of the first constituents through my door saying ‘we need to do something about this’.

“There’s been incremental progress – back in 2001 we got the first tower up but it didn’t cover a number of areas. It’s taken until now to get the second stage, and that was delayed because we needed to upgrade Groves Creek Bridge before the heavy equipment could be transported to the site.

“But what we’ve been able to achieve for the Speewah community is amazing – I congratulate Bob for his efforts, it shows what can be achieved through persistent, accurate advocacy.”

Mr Madden said people in the community were “ecstatic” and welcomed the increased security that came with mobile phone coverage, as well as the benefits for business.

“People are so accustomed to using mobile phones to call people. When they don’t have that facility it really handicaps the efficiency of their business,” he said.

“The support that Warren has given us has been unprecedented – we’ve worked together to achieve a goal and that is so laudable for Warren to have given us such support.”

Mr Entsch said his second call was to Michael Trout, the former Member for Barron River who was also a key advocate on this issue.

“I congratulated Michael for his role in coordinating a petition which gathered 579 signatures from residents and businesses in the Kuranda region. I presented this to Parliament in September 2014 and it was a major contributing factor to getting this outcome,” Mr Entsch said.

“My third call was to Suzy Grinter, on her mobile in Speewah. It was Suzy, while she was working for Michael, who actually initiated the petition.

“Suzy told me that from getting absolutely no reception she can now get four bars and make calls. This is good news for people who enjoy getting outdoors in the region and makes it safer for local mountain bike riders and horse riders.

“I look forward to working with other communities to achieve a similar outcome.”