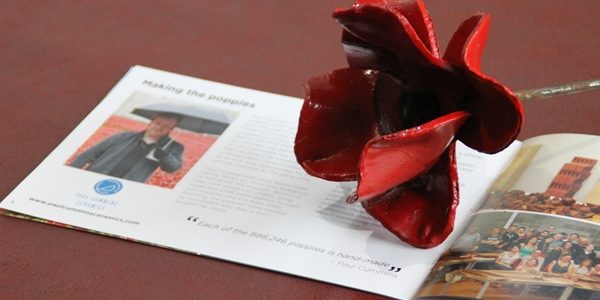 LEICHHARDT MP Warren Entsch has today handed over a beautiful ceramic poppy to Cairns RSL, one of more than 888,000 poppies that formed a sea of red at the Tower of London last year.

Thanks to the generosity of Leslene Woodward, a former Cairns resident now living in London, the Cairns community will be able to appreciate their own little piece of this internationally-recognised WWI Centenary event.

The major art installation Blood Swept Lands and Seas of Red at the Tower of London marked 100 years since the first full day of Britain's involvement in the First World War.

Representing each British military fatality during the war, 888,246 ceramic poppies filled the Tower's famous moat between 17 July and 11 November 2014.

“It was such a sensational visual display, and when you consider that every poppy represented someone’s husband, son, father or uncle, it gave you a real idea of the scope of lives lost,” Mr Entsch said.

All of the poppies that made up the installation were sold, raising millions of pounds which were shared equally amongst six service charities.

“Even though Leslene is living in London now, she has a strong connection to Cairns and wanted the poppy to have a home here, which was a very generous and thoughtful gesture,” Mr Entsch said.

“Unfortunately, even though it was packaged very carefully, one of the petals broke in transit.

“Luckily we have a fabulous artist here – Jennie Scott of the Cairns Art Society – who was able to carry out a wonderful repair job and you can’t even see the break line.

“Jennie said she loved working on the poppy and it was quite a coincidence that she took on the project, as she went to school just around the corner from where Leslene is now living.”

President of the Cairns RSL, David Clifton, said the poppy would go on display in the new interpretative centre which will form part of the refurbished facility.

“The loss we suffered as a nation had a really significant effect, as it did in England,” he said.

“Each one of the 888,246 poppies was individually hand-made ? they are unique, in the same way that each of the lives that were lost were also unique.”

Mr Clifton said the RSL’s preparations for the Anzac Day events in Cairns were going well, and he commended the Cairns community for its level of goodwill, support and assistance.

Mr Entsch said a stunning display, similar to the thousands of poppies, could be appreciated on a smaller scale here in Cairns on the lawn of the Bishop’s house near St Monica’s Cathedral.

“As part of the Anzac Reflections project being run through Catholic Education Services, more than 14,000 of our region’s students and teachers have written personal reflections about what ‘Anzac’ means to them on a plastic stake.

“These stakes have been arranged on the lawn to make an incredibly striking display and I’d urge everyone to call past and take a look this week.”

Mr Entsch also presented the RSL with a copy of Lee Kernaghan’s CD ‘Spirit of Anzac’, which will be played at the culmination of Saturday’s service in Cairns.