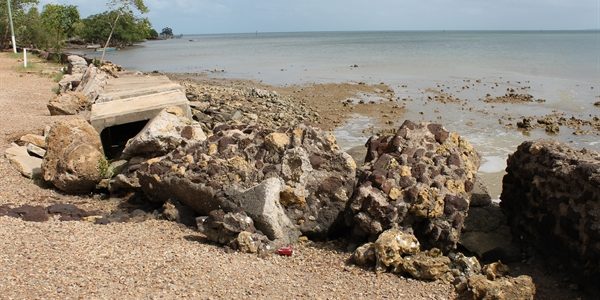 The Australian Government will invest a total of $12 million to support improvements to vital seawall infrastructure in the Torres Strait.

The joint Australian and Queensland Government project will see a total of $26.2 million provided for the construction and repair of seawalls on six Torres Strait islands that experience regular tidal and storm surge flooding.

Deputy Prime Minister and Minister for Infrastructure and Regional Development Warren Truss said $5 million from the Australian Government will come from the Community Development Grants Programme.

“The Australian Government will continue to ensure vital infrastructure and safety for our remote communities is a priority,” Mr Truss said.

“These works will provide residents of the Torres Strait islands with protection from the environmental elements in their region for at least a further 30 years.

“The Government’s plan for infrastructure investment recognises vital infrastructure extends beyond our urban centres and will ensure Australia’s regional communities are not forgotten.

“The funding from this project will not only combat coastal erosion through vital infrastructure control measures, it will create local jobs and give a boost to the local economy of the Torres Strait.”

Minister for Indigenous Affairs Senator Nigel Scullion said $6 million from the Indigenous Housing and Infrastructure programme, in addition to $1 million already provided, will improve community safety for more than 1,700 residents living on the islands.

“There are currently six Torres Strait islands that have an urgent need for coastal protection works and this project will improve safety on these islands, allowing residents to remain in their communities,’ Senator Scullion said.

“Ensuring health and safety related infrastructure is maintained in our Indigenous communities is always a high priority.

“I also encourage the Torres Strait Regional Authority to ensure it manages the project so as to maximise employment opportunities for local Indigenous people.”

Federal Member for Leichhardt Warren Entsch said that, after more than three years of pushing for funding on behalf of Islanders, having funds finally locked-in is a major step forward.

“It is not much for locals to ask for some protection from the annual tidal flooding that disrupts and damages businesses, community facilities and roads,” Mr Entsch said.

“The seawalls rehabilitation project will rebuild the old and broken-down seawalls across the six most vulnerable of the Torres Strait’s 14 inhabited islands.

“Minimising the disruption to work and family lives, and health and wellbeing caused by flooding, and through jobs that bring new skills to the community, we can look ahead with confidence.

“My message to locals on the islands and across the far north is that just because we are remote doesn’t mean our voices go unheard.”

David Kempton, Assistant Minister for Aboriginal and Torres Strait Islander Affairs and Member for Cook, said the Queensland Government had put its $12 million share of funding on the table from the State’s Major Infrastructure Program.

“The local community told us what was most important to them, and that was keeping their homes, families and communities together and safe, and we listened,” Mr Kempton said.

“The Torres Strait Island Regional Council has already put a lot of effort and consideration into planning for the seawalls project and now they can get on with building.

The project will take place over the next four years.