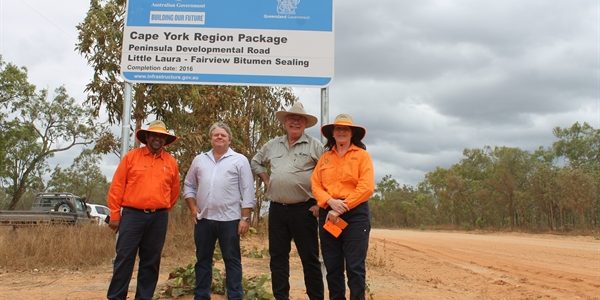 Construction is underway on all four Peninsula Developmental Road (PDR) sealing projects for this year, with earthmoving works having now commenced on the Little Laura to Fairview stretch.

Federal Minister for Infrastructure and Transport Darren Chester said the project to seal 4.6 kilometres of the PDR between Little Laura and Fairview is the latest project in a substantial package of works undertaken since 2014 to improve access for locals, freight transport operators and tourists to Cape York.

“By the end of 2016, the Cape York Region Package will have sealed over 274 kilometres of road, which equates to over 50 per cent of the PDR.”

“Elsewhere on the PDR, preliminary works on the 12 kilometre Musgrave project began in August, with construction of the 22 kilometre Coen South and 13 kilometre Archer to Wolverton projects starting this month,” Mr Bailey said.

“The principal contract for the Musgrave works had been awarded to RoadTek on a ‘sole invitee’ basis. This will allow RoadTek to provide targeted development of Indigenous businesses to assist them in seeking future pre-qualification.

“Preliminary works on the Musgrave project have begun, with subcontracted Indigenous businesses providing equipment hire, as well as crushing and screening operations.

“I had the opportunity to visit some of the PDR works during a visit to the Cape last month and all four projects are progressing well with the Coen South and Archer to Wolverton upgrades due to connect soon to the existing bitumen seal.

“Road users in the Coen area will enjoy 53.5km of uninterrupted bitumen seal once the project is complete and road users accessing the Archer River area will be able to drive for 52.3 kilometres before returning to unsealed conditions.”

Federal Member for Leichhardt Warren Entsch inspected progress on the Little Laura to Fairview upgrade today and met with contractors and indigenous workers onsite. He added that the sealing works taking place on the Endeavour Valley Road (EVR) are two weeks ahead of schedule.

“Eight Indigenous business and joint ventures are also working with RoadTek, primarily on the Musgrave project.

“Last year, 22 Indigenous trainees were trained on the job, almost 25 per cent of the businesses employed were Indigenous, and at the peak of construction there were more than 80 Indigenous people working on PDR projects.

“An average of 180 direct jobs will be supported over the life of the Cape York Region Package.”