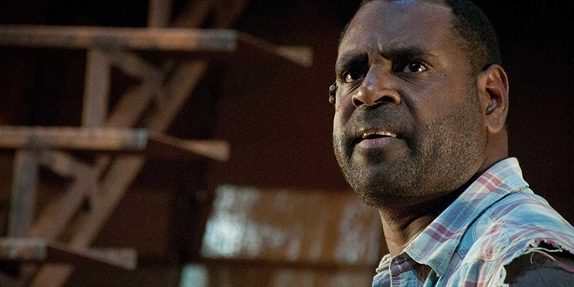 RENOWNED actor Jimi Bani, a regular on the stage and Australia’s TV screens, will soon be showcasing Torres Strait culture with the help of a grant through the Federal Government’s Indigenous Languages and Arts program, Leichhardt MP Warren Entsch announced today.

Funding of $137,858 will be provided over two years to develop and present the theatre work ‘My Name is Jimi’, a partnership between Mr Bani’s Lone Star Company (LSC) and the Queensland Theatre Company (QTC).

Starring Mr Bani and four generations of his family, the show is a mixed?media, multilingual performance about preserving culture and language on Mabuiag Island in the Torres Strait.

“Jimi is going from strength to strength – later this month he’s starring in the production ‘Title and Deed’ at the Belvoir Street Theatre in Sydney, described as a ‘uniquely indigenous take on an international theatre hit’,” Mr Entsch said.

“It’s great to see his next work – which takes him back to his roots – being supported through this valuable program.”

Three other Far Northern organisations were also successful in this round:

• The Olkola Aboriginal Corporation will receive $100,000.00 for the Olkola Language Revival project, which will establish an Olkola Language Group that will foster research, data collection and practice of Olkola language through resources, dictionary, stories, digital media, language camps, recordings;

• Cape York Institute will receive $156,000 over two years for a ‘Songs on Country’ workshop program, where children's songs will be written in language with the assistance of language speakers and well?known composer and music educator.

“These projects will provide important support for Indigenous languages and arts in our community,” Mr Entsch said.

Senator the Hon Mitch Fifield, Minister for the Arts, said the Turnbull Government will provide $22.8 million to showcase Indigenous cultural and artistic expression and support the maintenance of Indigenous languages.

“These projects will contribute to a vibrant and diverse Indigenous cultural landscape where Aboriginal and Torres Strait Islander peoples are empowered to maintain, celebrate and promote their arts and languages.”

Twenty-one Indigenous arts and languages organisations will receive almost $15 million over five years to support the revival and maintenance of Indigenous languages and the delivery of arts projects.

A further 63 Indigenous languages and arts projects will receive almost $8 million for projects to be undertaken over the next two years.

The Indigenous Languages and Arts program helps to maintain and encourage participation in Australia’s Aboriginal and Torres Strait Islander cultures by providing support for projects and organisations for language and arts projects.
More information about the program is available at www.arts.gov.au