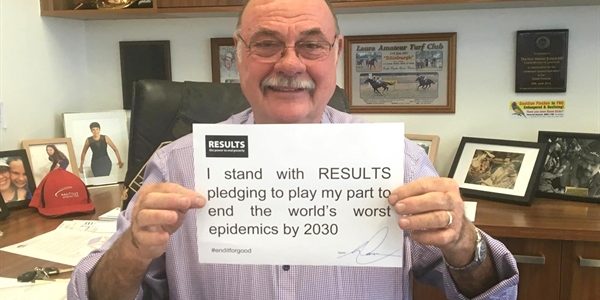 Well over half of Australia’s federal parliamentarians (135 of 226 senators and members) have this week signed letters calling on the Australian Government to increase support for the Global Fund to Fight AIDS, Tuberculosis and Malaria, which is seeking renewed funding to continue its work for 2017-2019.

The Global Fund is the world’s financing facility for fighting the three great epidemics. Since 2002, programs supported by the Fund have saved 20 million lives. In Australia’s region alone, the Indo-Pacific, 8.3 million lives have been saved by helping 3.2 million people to access anti-retroviral HIV medicine, 8.2 million tuberculosis treatments and distribution of 142 million mosquito nets.

At a pledging conference to be held in Montreal on September 16, the Fund will seek a further US$13 billion from the global community to continue its work for another three years. The event will be hosted by the Canadian Prime Minister, Rt. Hon Justin Trudeau.

Australia contributed AUD$200 million over three years at the last pledging conference in 2013. Mr Entsch said Australia ought to now increase its contribution:

“The Global Fund is an investment, not a cost. I support the Global Fund because it takes a ‘teach a man to fish’ approach. As the Global Fund eliminates the scourge of AIDS, tuberculosis and malaria it is also building better health systems, educating and training health workers and encouraging nations to become self-reliant.

“Ultimately, it is in Australia’s interest to lift the burden of the three diseases in our region so that our near neighbours become healthier, more secure and prosperous.”

“The building blocks of prosperity are health and economic empowerment. By building healthier societies and ending epidemics in Asia and the Pacific, Global Fund programs are allowing millions of people to lead more fulfilling and productive lives. Each dollar Australia invests in the Global Fund generates a 20-fold return in the Indo-Pacific region.”

“As we speak to parliamentarians it is clear that there is broad support to accelerate momentum towards ending AIDS, tuberculosis and malaria. This issue has united the parliament as MPs realise that hard fought gains could be lost if political and financial commitment is not strengthened.”

Earlier today, the United States National Security Adviser Ms Susan Rice announced that the Obama Administration would pledge up to US$4.3 billion at the Montreal conference on a $US1 for $US2 basis. That is, if all other donors including Australia pledge $US8billion, the United States will commit the additional amount necessary to meet the $US13 billion target.