Cairns leading the way in tropical health research and training 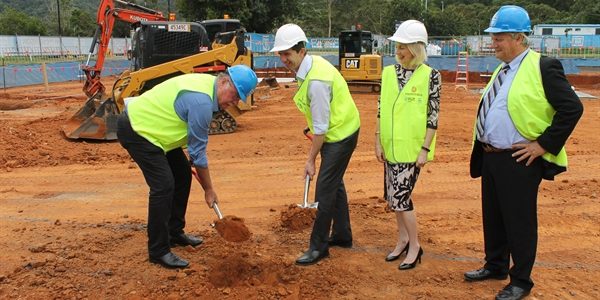 Northern Australia’s potential as a tropical research hot spot is a step closer to reality as construction starts on a new facility at the Australian Institute of Tropical Health and Medicine backed by $18 million from the Turnbull Government.

Minister for Education and Training Simon Birmingham and the Member for Leichhardt Warren Entsch today turned the first sod to mark the commencement of building works for the world-class tropical health research and training facility.

The new facility at James Cook University’s Cairns campus will build Australia’s research and training abilities in virology, disease and transmission control as well as the development of new treatments and vaccines for tropical diseases.

Minister Birmingham said Australia’s highly technical and advanced research capability provided it with a distinct opportunity to take a leading role in tropical health and medicine.

“This is an important foundation in the research effort to improve the health outcomes for regional and remote communities in tropical Australia and across the world,” Minister Birmingham said.

“The work conducted right here in Cairns will lead to breakthroughs that will reduce mortality rates and the burden of suffering for people who contract tropical diseases around the world, which also improves workforce productivity, the attractiveness of tropical regions for economic investment and overall quality of life.”

Mr Entsch said the commencement of work was great news for the people of Cairns and the Torres Strait Islands, and reflected the Government’s commitment to the development of Northern Australia.

“Our location also means Australia is exposed to many tropical diseases, such as Zika, malaria and dengue fever, and has potential for exposure to biosecurity risks such as tuberculosis.

“This facility will ensure Australia is on the front foot in the face of these threats and will build on James Cook University’s reputation as an international leader in tropical health and medicine.”

Queensland Senator Ian Macdonald welcomed the turning of the first sod for the Cairns facility by his parliamentary colleagues and said that the Australian Institute of Tropical Health and Medicine exemplifies the enormous potential of Northern Australia.

“The Institute of Tropical Health and Medicine is another example of James Cook University and Northern Australia taking a leadership role both at home and across the entire Tropic Zone,” Senator Macdonald said.

“And I am delighted that the Government’s commitment to the Australian Institute of Tropical Health and Medicine, that I announced on behalf of the Coalition prior to the 2010 election, has come to fruition.”

The Australian Government committed $18 million to the new facility. That funding is part of a broader $42 million election pledge to the Australian Institute of Tropical Health and Medicine that has been matched by the Queensland Government.