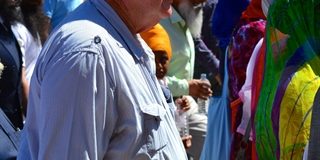 LEICHHARDT MP Warren Entsch has described himself as “honoured and privileged” to lead a Remembrance March for the 1984 Sikh genocide in Melbourne last Saturday.

More than 1000 people marched from the State Library of Victoria to Federation Square, led by Mr Entsch and Sikh community leaders from the USA, Canada, NZ and Australia.

Addressing the gathering, Mr Entsch said it was a “blight on humankind” that despite there being a now-universal understanding of what genocide is, such atrocious acts have not stopped.

“Today we gather to remember the more than 37,000 victims of the Sikh Genocide which took place in India in November 1984,” he said.  “30 years on, the physical wounds from that terrible time may have healed but the damage inflicted to the psyche of a generation of Sikhs remains.”

Mr Entsch has been involved in the cause for several years, after becoming aware of the events of November 1984 through discussions with a friend, Cairns resident Daljit Singh.

After a long history of conflict between Sikhs and Hindus in Northern India, the assassination of Indian President Indira Ghandi by her Sikh bodyguards ? in retaliation for a military raid on a Sikh temple ? sparked a concerted backlash and campaign of brutal organised violence to which police and authorities turned a blind eye.

During the violence, it is estimated that at least 37,000 Sikhs were killed, more than 300,000 displaced and rendered homeless, and hundreds of temples destroyed.

On 1 November 2012, the 28th anniversary of the event, Mr Entsch tabled a petition calling on the Australian Government to recognise that an organised campaign of horrific violence took place against Sikhs in November 1984, and that these killings were ‘genocide’ as per the UN Convention on the Prevention and Punishment of the Crime of Genocide.

Organised by Daljit Singh, the petition gained almost 4500 signatures and it was the first time the issue had been raised in the Australian Parliament.

“Unfortunately the Minister for Foreign Affairs in the previous Government did not even acknowledge the petition,” Mr Entsch said.

“This was extremely disappointing given that earlier in 2012, the Australian Government had recognised the act of genocide in Srebrenica, Bosnia, in 1995, when 7000 men and boys were massacred due to their Muslim faith.

“Why should the Sikh community have to wait so long for the same recognition?

“It is clearly not right so I’ve pledged my support to continue working to achieve recognition of the Sikh Genocide in the Australian Parliament.”

Mr Entsch acknowledged the work being carried out by the Supreme Sikh Council of Australia and the Sikh Genocide Recognition National Committee, which includes Daljit Singh.

“They work tirelessly to raise awareness about the Sikh Genocide – and other acts of genocide around the world – as well as being a strong advocate on issues that affect the Sikh community,” he said.