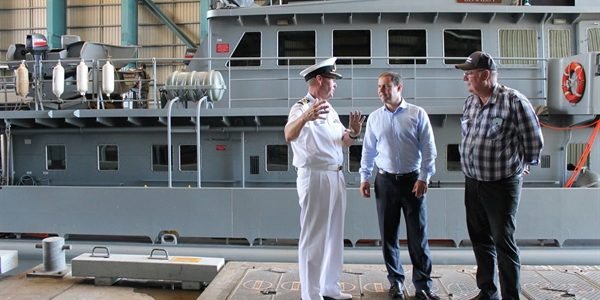 It is the culmination of detailed analysis of our strategic environment, Defence’s priorities and objectives, and the capabilities required to achieve these outcomes.

The Government will increase Defence spending by $29.9 billion over the next decade to deliver the strategies and plans set out in the 2016 White Paper.

“This White Paper delivers on our 2013 election commitment to return Defence spending to 2 per cent of GDP within the decade, a full three years earlier than planned,” Mr Entsch said.

“I’m also very pleased to see the focus on strengthening the defence presence in Northern Australia – this was a key recommendation out of the Pivot North report, which was carried through into the White Paper on Northern Australia.”

• Development of additional wharf space and other support facilities, including adequate maintenance and support infrastructure in Cairns to support those Offshore Patrol Vessels (OPVs) to be based in Cairns. The Government will acquire 12 OPVs to replace the current Armidale Class patrol boats from the early 2020s. These improvements represent an investment in HMAS Cairns of around $120 million in the decade to 2025-26, and a further $300 million approx. in the decade between 2025-26 and 2035-36.

• Significant investment will be made in new infrastructure at several RAAF Bases in coming years, including RAAF Base Scherger (Weipa) to support the introduction of the F-35A Lightning II Joint Strike Fighter. This represents an investment in Scherger of about $20 million in the decade to 2025-26, and approximately $110 million in the decade between 2025-26 and 2035-36.

• Australia’s military hydrography capability will be strengthened through the replacement of the two Leeuwin-class hydrographic vessels based at Cairns with a specialist military survey vessel from the early 2020s.

“The investments outlined in the Turnbull Government’s 2016 Defence White Paper will strengthen our Defence Force and provide a welcome boost to our regional economy,” Mr Entsch said today.

“Defence is already a major employer in Leichhardt with around 1300 Defence personnel based here, which has significant flow-on effects for the local economy. In fact, every dollar invested in HMAS Cairns for example boosts the local economy by more than $5.

“Just last Friday we had the Minister for Resources, Energy and Northern Australia, Josh Frydenberg MP, here to visit HMAS Cairns and get a first-hand insight into the base’s capabilities and potential for future expansion.

“It was invaluable for HMAS Cairns CO Carl Capper, along with Advance Cairns and the Cairns Chamber of Commerce, to be able to emphasise the base’s capacity to host at least several of the new Offshore Patrol Vessels and other assets directly with the Minister.”

“Australians can be confident the Turnbull Government will continue to deliver on its most important task – defending our nation and protecting and promoting our national interests,” he ended.