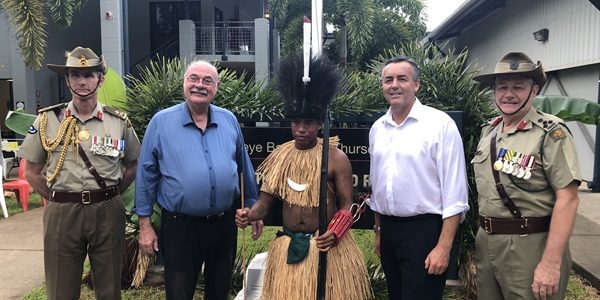 Federal Leichhardt MP Warren Entsch said he was honoured to be part of the 75th Anniversary of the establishment of the Torres Strait Light Infantry Battalion remembrance held at the weekend.

He said the Dawn Service held on Saturday at the Fort was particularly moving.

“The Torres Strait Light Infantry Battalion was the only indigenous Australian battalion ever formed by the Australian Army,” Mr Entsch said.

“Eight hundred and seventy Torres Strait Islander men, about one-fifth of the population of the Torres Strait at the time, joined the ranks, serving alongside 5,000 non-Indigenous troops.

“In proportion to population, no community in Australia contributed more to the Second World War effort.

“The battalion represented a significant contribution to the Australian war effort and formed a very special part of our nation’s history.”

Mr Entsch said he was pleased the only two surviving members of the battalion Private Mebai Warusam, from Saibai Island and Private Awatie Mau from Bamaga could make the event.

“It is always a pleasure to catch up with Mebai and Awatie. These two men are true Australian heroes,” he said.

“In fact, Mebai and Awatie enlisted together on the same day. I have been extremely fortunate to call Awatie my friend for many decades.

“Mebai and Awatie, along with the other brave men of the Torres Strait Light Infantry Battalion, were quite literally the first line of defence against the Japanese in World War Two.

“It was great to share this special occasion with them both.”