Green Army on the ground in Leichhardt 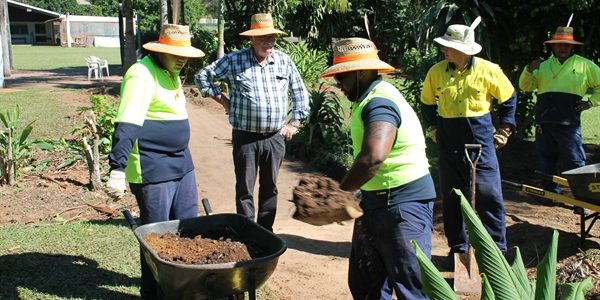 FEDERAL Member for Leichhardt Warren Entsch has today met with the first two Green Army teams to get up and running in Cairns, speaking to trainees and inspecting their Greenhouse and Bush Tucker projects.

The teams are being coordinated through Mooroobool-based organisation Choice Australia, in conjunction with Conservation Volunteers Australia.

Choice Australia will then invite locals and visitors from Australia and overseas to the site to educate them about the relationship between the first Australians and native plants and bush tucker.

At the site today, the trainees showed Mr Entsch around the grounds where they were clearing areas to establish the new garden beds and greenhouses.
“It was really good to speak to the trainees and see how they’re going with the project, and I made a point of congratulating them for taking up this opportunity,” Mr Entsch said.

“From my experiences with the old Green Corps program, at a bare minimum the trainees will learn new skills, gain work experience and meet new people. But as time went on, many of them actually found jobs through the program and made friends for life.”

Choice Australia will run a total of eight Green Army Greenhouse/Bush Tucker courses here in Cairns through to the end of 2016, and will employ 72 young people over that time period.

“These young people who are taking part will find it incredibly rewarding – they’re generating real environment and conservation benefits for the community, as well as gaining experience to help them prepare for the workforce,” Mr Entsch said.

The Green Army is a key Government commitment, with $525 million budgeted over four years – bringing the total investment in natural resource management to more than $2 billion.

The Green Army Programme will encourage practical, grassroots action to support local environment and heritage conservation projects across Australia. It will also provide valuable, practical training to 15,000 young Australians by 2018.

“During the next six months we’ll see first-hand the benefits and improvements made to our local environment through activities undertaken by the Green Army,” Mr Entsch said.

Opportunities to join a Green Army project can be found here