WWII veteran reunited with his medals 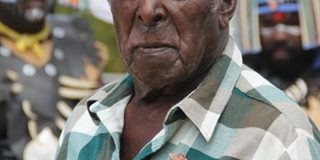 ONE of the last surviving members of the Torres Strait Light Infantry Battalion has been honoured with a formal presentation of his medals and a Certificate of Appreciation from the Australian Government.

Federal Member for Leichhardt Warren Entsch was visiting Saibai Island last year when he heard about Mr Mebai Warusam, aged 91, whose children had lost his original medals many years ago.

“Mebai told me that during one of his fishing trips, his children were playing with his medals ? thinking they were coins ? and unfortunately lost them, never to be seen again,” Mr Entsch said.

“I told Mebai that I would be honoured to arrange for his medals to be reissued and I would personally present them to him on my next trip to Saibai.”

Mr Entsch requested for the Department of Veterans’ Affairs to reissue the medals, as originals rather than replicas, and had them mounted in Cairns.
He also obtained an official Certificate of Appreciation from the Australian Government for service during the Second World War, which is signed by the Prime Minister Tony Abbott, Mr Entsch and the Minister for Veteran’s Affairs, Senator Michael Ronaldson.

During the Queensland Health Awareness Expo on Saibai last Tuesday, 14th April, Mr Entsch presented a very proud Mr Warusam with his medals and certificate in front of the entire island community and visiting Queensland Health staff and management.

“What’s important to remember is that these 870 volunteers represented virtually every able-bodied man of age in the Torres Strait.

“Their absence during the four years of service had a real impact on the island communities ? they were left with only the older men, women and children, which would have been very difficult for them.”

Members of the TSLIB were among the more than 150 lives that were lost in the Torres Strait as a result of Japanese bombing raids on Australia’s northernmost border.

“Their efforts and sacrifices must not be forgotten, which is why I’ve worked hard to ensure they receive the recognition they deserve,” Mr Entsch said.

“I’m very pleased that Pvt Warusam will now be able to wear his medals with pride on Anzac Day.”