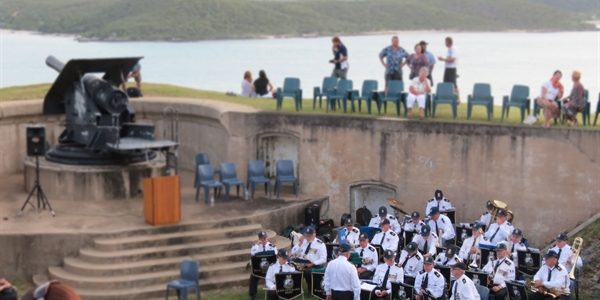 ANZAC Day commemorations in the Torres Strait had a unique flavour this year thanks to the Royal Australian Navy Veterans Band, says Federal Member for Leichhardt Warren Entsch.
Mr Entsch said the band travelled to Thursday Island to provide musical support at Anzac Day services, schools and aged care facilities – supported by an Australian Government Saluting Their Service grant of $2920 to assist with expenses.
“This was a fantastic opportunity for the people of Thursday Island to enjoy the musical talents of the Royal Australian Navy Veterans Band,” he said.
“The band is made up of former members of the Royal Australian Navy Band, and was formed in 2000 to march in the Sydney Anzac Parade. Each year they travel around Australia and overseas to provide musical support at ceremonies for Anzac Day, Vietnam Memorial Day, Remembrance Day and other remembrance events.
“It is an absolute privilege that this year they chose Thursday Island to perform on Anzac Day,” he said.
Mr Entsch said each member of the band pays for their own travel, accommodation, meals and transport, and so the Australian Government grant would be welcome assistance.
The Royal Australian Navy Veterans Band performed at the Dawn Service at 5am, at the official march at 9am, and again at a short concert in Memorial Park.
The Royal Australian Navy Band Association was one of 68 funding recipients from the latest round of Saluting Their Service grants, with more than $178,000 being allocated to community and ex-service organisations around Australia.
The Saluting Their Service grants programme helps the Australian community from all walks of life to contribute to the commemoration of those who have served and continue to serve our nation. The programme is designed to preserve our wartime heritage and to involve people across Australia in a wide range of activities and projects.
Further information can be seen on the Department of Veterans’ Affair’s (DVA) website at www.dva.gov.au