Focus on developing and safeguarding the north in ag white paper 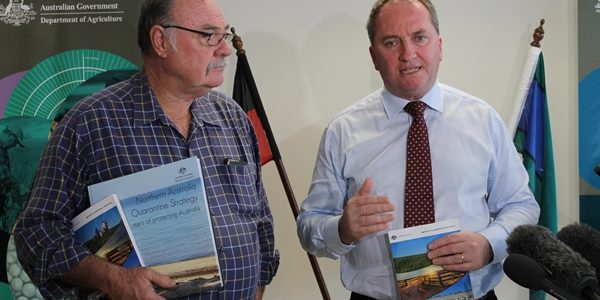 Minister for Agriculture, Barnaby Joyce, and Member for Leichhardt, Warren Entsch, were in Cairns today to highlight the importance of biosecurity to the north’s development ? and to the whole Australian community.

Minister Joyce said the Agricultural Competitiveness White Paper released on the weekend committed $300 million to improve biosecurity at the border and onshore-which comprises a $200 million boost for biosecurity surveillance and scientific expertise and $100 million for pest and disease management and eradication programmes.

“This government understands biosecurity’s importance ? the Parliament recently passed the Biosecurity Act 2015 and we are now investing so we can better understand and manage the biosecurity risks that can be brought into Australia wittingly or unwittingly by travellers and cargo ? and naturally by the wind and tide.

“Northern Australia is a good example of the complexity of the challenge ? it’s sparsely populated, mere kilometres from our nearest neighbour and has a tropical climate-all of which makes it especially receptive to many potentially harmful pests and diseases.

“On Wednesday I was pleased to expand on the $12.4 million for the Indigenous Ranger Biosecurity Initiative that forms part of the $200 million the Australian Government is investing in biosecurity.

“This investment will increase biosecurity surveillance, while at the same time improving skills, participation and employment opportunities for Aboriginal and Torres Strait Islander communities in northern Australia.

“From 1 July, this year, $100 million for pest and disease management and eradication will be available over four years to support eradication programmes and better manage established pests animals and weeds.

“That is good news for northern Queensland with a number of detections in recent years, including panama disease, Asian honey bee and red imported fire ants.”

“Given the recent detection of panama disease in this region, and the impact of Black Sigatoka in the past, our producers know better than most the impact of exotic pests and diseases,” Mr Entsch said.

“That’s why I’m pleased to be in a government that is focused on investing in the future of our producers ? there is $8 million in an Immediate Assistance Fund to support the fast deployment of national and international experts and specialised equipment in the event of another detection.”

Mr Entsch said he had also met yesterday (THUR) with community stakeholders and the Wet Tropics Management Authority at Russett Park, Kuranda, to help develop a plan to deal with the recent establishment of highly invasive yellow crazy ants in the region.

“The White Paper also invests $500 million in water infrastructure projects, $50 million of which will be used to ensure good planning so that viable projects are developed in the best interests of farmers and the community,” Mr Entsch said.

“Key projects in this region-like Nullinga Dam-may be appropriate for us to look at in more detail.”

The White Paper was informed by comprehensive stakeholder consultation ? more than 1000 submissions were received and the government talked face-to-face with more than 1100 people across the country in developing the document.

The White Paper is available at agwhitepaper.agriculture.gov.au.