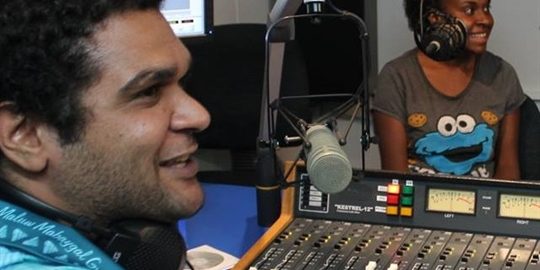 “Having a local radio station on Thursday Island is absolutely invaluable,” said Mr Entsch. “It gives the community an opportunity to share information, promote their culture and discuss issues from a truly unique perspective.

“They’ve come a long way from humble beginnings in a small room at the back of Thursday Island’s Commonwealth building, to an office with two main studios and a production studio.

“Particular credit goes to the late Aunty Ellie Gaffney who founded the radio station back in 1985 when Indigenous media first began across Australia. Her vision and guidance undoubtedly contributed to their successes over the years.”

The 4MW Board of Directors will be blessing the new studio this Friday to coincide with the radio station’s 30th anniversary, but official celebrations have been postponed until October.

“In the last three decades, 4MW has become a true institution in the region,” said Mr Entsch.

“I’m sure that, with the Board’s blessings and the support of the local community, 4MW can look forward to another 30 years of being the ‘Voice of the Torres Strait’.”

4MW can be heard across the Torres Strait Islands on 1260AM, and broadcasts in the four primary languages of the region – Creole, Australian English, Kalaw Legaw Ya and Meriam Mir.