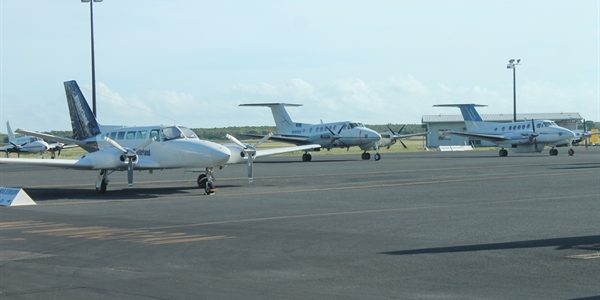 LEICHHARDT MP Warren Entsch has congratulated Australian Education Overseas on its vision to develop a flying school for Chinese pilots in the Cairns region, saying it would complement and strengthen numerous local industry sectors.

“This is an exciting proposal for the Far North and I have to commend Australian Education Overseas and its directors Carl Williams and Victoria Cuda for their efforts to date in building this very important relationship with Shanghai Jiao Tong University Education Group,” Mr Entsch said.

Hosted by Australian Education Overseas, four representatives from the Shanghai Jiao Tong University Education Group are visiting Mareeba and Cairns Airports and meeting with key aviation stakeholders as they look at how the proposal for a flying school at Mareeba could work.

Mr Entsch said the region was ideal for such a facility thanks to its well-developed general and commercial aviation sector and Cairns’ unparalleled connectivity for a regional city with direct flights to nine domestic and nine international destinations, along with the recent decision by CQUniversity to expand its range of aviation courses offered in Cairns.

“I’m not surprised that so many local aviation companies and other stakeholders have already expressed their interest in, and strong support for, this concept,” Mr Entsch said.

He added that the establishment of a flying school would support many of the focuses in the White Paper on Developing Northern Australia.

“The White Paper recognises that around half of the world’s air traffic growth over the next 20 years will be to, from, or within the Asia-Pacific region with passenger numbers expected to grow by 1.8 billion,” he said.

“Tourism and Hospitality and International Education are identified as two of the five industry pillars that play to Australia’s strengths and have the most potential for growth.”

To capitalise on this as a government, a business stakeholder group is being established and part of their brief will include;

‘… developing measures to support the sustainable and long term growth of both Australian and international airlines’ air services to and from northern Australia and identifying opportunities to better integrate the north with ASEAN trading partners and the region’.

“I welcome the interest from Australian Education Overseas and the Shanghai Jiao Tong University Education Group in this industry. Initiatives from the private sector that will help attract new airline connections and international investment and grow the aviation sector in northern Australia will play a critical role in the long term development of the region,” Mr Entsch ended.