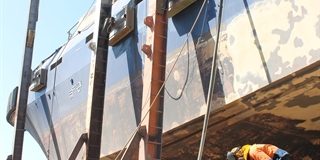 LEICHHARDT MP Warren Entsch is urging local businesses to find out how they can make the most of current and future growth opportunities in the defence industry by attending a Naval Shipbuilding briefing in Cairns later this month.

“This is a fantastic opportunity for our local industry and is perfectly aligned with our focus here in Cairns of becoming the maritime maintenance and sustainment hub for Northern Australia,” Mr Entsch said.

“We’re well on our way with Austal being awarded the $24 million contract to provide support services for the existing Pacific-class and new Pacific Patrol Boats for an initial seven years in Cairns, with support services contracted to start early 2018, and Thales Australia getting the new Armidale Class Patrol Boat In Service Support contract. The contract has a potential value of more than $55 million per annum and will start on 1 July 2017, with existing sustainment activities in Cairns to be maintained.

“These opportunities build on existing contracts for maintenance and sustainment of Border Force’s Cape-class patrol boats and the hydrographic ships that currently based in Cairns ahead of their decommissioning.

“We’ve also got the planned improvements to HMAS Cairns and RAAF Scherger over the next two decades, the basing in Cairns of the new replacement hydrographic vessel along with the $25 million Cairns Marine Precinct upgrade which will start being delivered later this year.

“It’s a very exciting time and a reflection of the outstanding ability and capacity of our industry and the skill-sets of our trades to be able to deliver on these contracts.”

The briefing on May 15th will focus on the next generation of naval surface ships; specifically the Future Frigate and Offshore Patrol Vessels, which represent a $39 billion investment by the Australian Government.

The Hon Christopher Pyne MP, Minister for Defence Industry, said the Future Frigate and Offshore Patrol Vessel programs would directly create over 2500 jobs for Australians and indirectly support the jobs of many thousands more.

“Where possible and practical, Australian companies should be in a position to benefit from the economic advantages of a thriving domestic defence industry,” Minister Pyne said.

Mr Entsch said briefings like the one being held in Cairns were critical for providing opportunities for local companies to enter the supply chain.

“I’d strongly encourage our local industry to head along to the briefing—particularly those in maritime, manufacturing and construction sectors,” he said. “It would also be very useful for local regional development bodies, universities and research establishments to attend.

“For those new to Defence, there will be a workshop for small and medium enterprises on the same day to learn more about doing business with the Department of Defence.”

Industry will be provided with high-level updates on the two shipbuilding programs and how they can get involved by registering with the newly-launched Centre for Defence Industry Capability (CDIC). Almost 400 businesses have already registered for Naval shipbuilding updates through CDIC’s portal.

Cairns is currently anticipated to host three of the new Offshore Patrol Vessels, however Mr Entsch and other regional development bodies such as Advance Cairns have strongly advocated with the Minister for Defence Industry for additional vessels to be based here.

The Cairns briefing will take place on Monday 15th May from 3.00pm at Cairns Cruising Yacht Squadron, 42/48 Tingira Street, Portsmith. To attend, please register at https://www.eventbrite.com.au/e/cairns-naval-shipbuilding-industry-briefing-tickets-33035019633

For further information on the Centre for Defence Industry Capability’s services, visit www.business.gov.au/cdic