Douglas to benefit from sporting grants 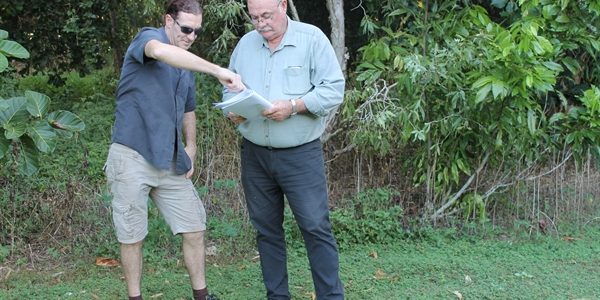 Mr Entsch met up with DIRT Club Secretary Lachlan Pearce in Port Douglas recently to check out the site of the Skills Park, on land adjacent to the Reef Raiders Rugby Club grounds and the Port Douglas Community Centre.

“The funding will help the club to develop an unused section of the Port Douglas Sports Reserve, creating a trail system that would be safe for riders of all skill levels,” Mr Entsch said.

“I’m all about helping our region’s sporting scene to grow, and I have no doubt that this new Skills Park will prove invaluable in training up the next generation of mountain bikers before they tackle the many trails around the Cairns hinterland.”

Club President Robert Borzi said the Park would include a cross-country style circuit of over 1000 metres, a 150 metre pump-track circuit, a 300 metre skills circuit and 30 metres of bridge work through the adjacent swampland.

“We are rapt to be provided with funds to make the Family Skills Park happen,” he said.

“This project will not only be a real boost for many sectors of our local community including youth, recreational and experienced mountain bikers, it will also improve Port Douglas as a tourist destination.”

The new Mountain Bike Skills Park is estimated to cost just over $27,000 and is due for completion in November this year.

Port Douglas Tennis Club Secretary Charles Arter welcomed the news, saying the grant allowed the Club to go ahead with the re-construction of courts 2 and 3 and much-needed new fencing.

“This is going to make an enormous difference to the facilities for all players and especially for the future of the programs for junior development at our club,” he said.

Mr Entsch said the upgrades would result in increased usage of courts in all weather, growth in membership, make the courts safer and bring them to a standard suitable for inter-club tournaments and competitions, enhance coaching programs, boost social and competitive tennis within the club, and increase rental income from court hire by the public.

He also congratulated the Club for putting a significant amount of money into this much-needed refurbishment, adding that he was “very pleased that we could help with this modest contribution.”

An independent panel, working with Mr Entsch, has been able to allocate $150,000 in total each year to projects in Leichhardt with proponents making a dollar-for-dollar contribution.

“By doing this, we’ve been able to leverage the greatest benefit from the funding and it also makes sure that communities have ownership of the projects into the future,” Mr Entsch said.

Round 2 of the SCP has now closed and applications are being assessed, with successful projects currently being announced for funding in the 2016-17 financial year.