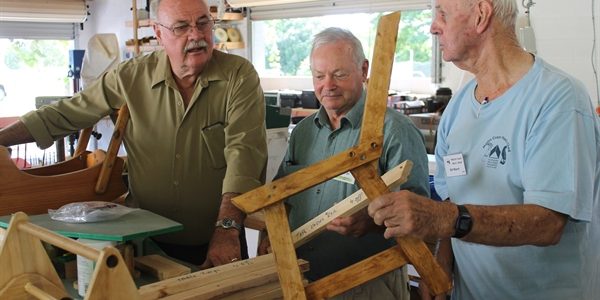 – up to $15,345 to the Marlin Coast Men's Shed for their Enhancement and Fit Out project

– up to $20,000 to the Cairns Men's Shed for the Shed for Wood Working Members project

– up to$9,585 to the Queensland Police-Citizens Youth Welfare Association for the Installation of Fan and Gymnastics Equipment

“This is fantastic news for these non-profit groups, which do essential work in our communities but are often run on the smell of an oily rag,” Mr Entsch said.

“I’d like to congratulate each of the successful applicants because for every dollar the government invests, the proponents themselves have made a matching contribution either from their own funds, partner funds, or in-kind contributions such as volunteer labour and expertise.”

The Marlin Coast Men’s Shed upgrade includes the fit-out of an office, kitchen and meeting/social area.

Mr Entsch visited the Shed recently and caught up with President Bill Kidston and some of the more than 50 members who spend time at the Shed on Monday, Wednesday, Thursday and Saturday mornings.

“MCMS is very active and one of the few Sheds that has been able to build its own facility,” Mr Entsch said. “It’s taken a lot of sweat and toil, but if you’re looking at a model of how to develop and grow a Men’s Shed then this is certainly one to look at.

“As well as outfitting an office so we can securely store files and equipment, the upgrade will replace a sink and small bench with a full kitchen where members can prepare basic food, and take part in cooking and nutrition classes in the future,” Mr Entsch said.

Mr Kidston welcomed the MP’s interest in the group’s activities. “We’re lucky to have a federal member supporting us this way, there aren’t many that have this level of support.”

The Cairns Men’s Shed is also upgrading its facility by building a shed to isolate the Club’s dusty and noisy wood-working and wood-turning sections, which are currently in the same area as the social and recreational spaces.

“Dust and noise pollution aggravate member with respiratory problems, causing them to stay away from the Shed even when the equipment’s not being used,” Mr Entsch said.

“The external shed will increase the area of the current clubrooms by a third, so they can expand and offer more services to existing and new members.”

Thirdly, the Cairns PCYC will use the SCP grant to supply and install an overhead Low Speed High Volume fan for the basketball hall, as well as upgrading equipment used for popular gymnastics classes.

“This fan will increase airflow in the hall, making it more comfortable for players and visitors and reducing the risk of heat stress-related fatigue,” Mr Entsch said. “The court hosts a whole range of community activities and at times has 400 people on it, so this will make a big difference in temperature and is very cost-effective to run.”

An independent panel, working with Mr Entsch, has been able to allocate $150,000 in total each year to projects in Leichhardt with proponents making a dollar-for-dollar contribution.

“By doing this, we’ve been able to leverage the greatest benefit from the funding and it also makes sure that communities have ownership of the projects into the future,” Mr Entsch said.

Round 2 of the SCP has now closed and applications are being assessed, with successful projects currently being announced for funding in the 2016-17 financial year.