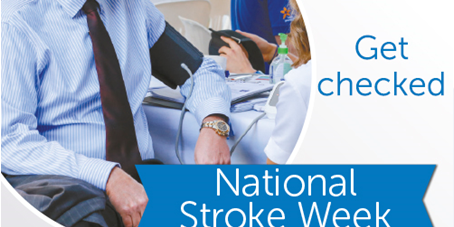 LEICHHARDT MP Warren Entsch has urged his Parliamentary colleagues and the broader public to ‘Be Aware, Live Healthy and Get Checked’ to counter the risk of stroke in the community.

On Friday, Mr Entsch hosted an afternoon tea at his office to highlight the upcoming National Stroke Awareness Week (September 14-21). One in six people will have a stroke in their lifetime.

“Twelve months ago, 42-year-old Gretel Burgess was seven weeks off finishing her master's degree in social work,” Mr Entsch said in a speech in the House of Representatives on Monday.

“She was camping with her husband and children in the Daintree rainforest when suddenly it felt like someone had grabbed a shovel and whacked her on the back of the head.

“She lost her vision. She could not move. She was screaming with pain and suffered severe vertigo to a point where she was vomiting every time she was moved. She said: 'I felt like I was in a black helmet of darkness and the words were floating around, but I couldn't grab them. I couldn't tell my husband what was wrong.'”

Fortunately, Gretel was able to access the “brilliant” STEPS (Skills To Enable People and Communities) program at the Cairns North Community Health Facility, Mr Entsch said, and has come an incredibly long way.

“She has now used her experience to her advantage, training to run the STEPS program as a peer facilitator. She has also finished her studies, and graduated last month.”

At the age of 62, Bayview Heights resident Roy Thorpe experienced two heart failures and a serious stroke, leaving his right side “not quite working like it used to”.

“Roy struggled to recover while supporting his wife and two sons, aged nine and 12 at the time, on a disability pension. While he was in the rehabilitation ward in the Cairns Hospital, he did not feel like he should be in the same ward as—as he viewed it—'the old people'.

“After sitting at the kitchen table for six years, Roy was experiencing depression and decided to try and get back to work. A qualified civil structural engineer, he got a job with the Cairns city council at the age of 69, and he has now worked there for the past eight years. He has also seen his two sons graduate from university.

“Roy's story shows what can be achieved with a bit of support from government and, more importantly, the right attitude,” Mr Entsch said.

At the afternoon tea, Kerry Stingel from Cairns Occupational Therapy (also the President of the Far North Queensland Allied Health Association) told Mr Entsch that with the right rehabilitation, people can keep improving significantly after a stroke.

“But, without access to ongoing occupational therapy, speech and language pathology and physiotherapy, they can be more dependent than they need to be in the long term,” Mr Entsch said.

“Kerry's mum was an active, outgoing 69-year-old when she had a major stroke a year ago after heart surgery, resulting in ongoing problems with movement and speech.

“Kerry told me about the difficulties in getting ongoing rehabilitation for people once they leave the hospital and are in their home or in an aged-care facility. “She asks, 'Where is the funding for slow-stream rehabilitation?'

“She says the enhanced primary care rebate also needs to be increased. It has not changed for many years and only covers five sessions in total, for all allied health, in a calendar year.

“I think this is something that we really need to consider when we are formulating future health policy,” Mr Entsch told Parliament.

The Leichhardt MP urged his colleagues – together with Far North Queensland organisations and businesses – to hold an Awareness Week event in their own offices. Supporting material and information can be accessed at www.strokefoundation.com.au/strokeweek