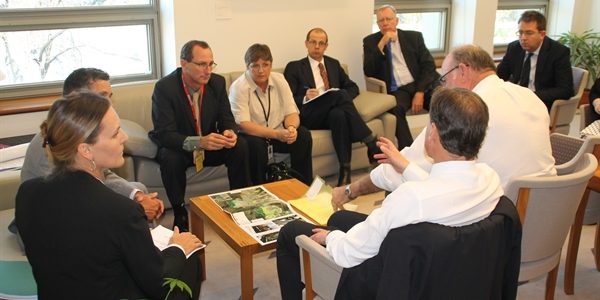 STAKEHOLDERS who travelled to Canberra to argue for the long-term eradication of yellow crazy ants in and around the World Heritage Wet Tropics Area are pleased with the outcome of yesterday’s meeting with Environment Minister Greg Hunt and others.

They were supported by a local landowner and representative for the rural community, Frank Teodo, and the LNP’s Candidate for Kennedy, Noeline Ikin, together with Queensland Senators James McGrath and Ian Macdonald, before going on to meet with representatives from Labor, Independents and the Greens.

“The group left the Minister in no doubt about the environmental, ecological, economic and social impacts of an uncontrolled yellow crazy ant infestation,” Mr Entsch said.

Mr Teodo gave a graphic account of how the ants had invaded his home, including coming through the light fittings in the ceiling and forming super-colonies around his property.

“I woke up one night with ants on my face – spraying formic acid into my eye, which ate away at the surface of my cornea and left me temporarily blinded,” Mr Teodo told Minister Hunt. “The pain was horrendous.”

Mr Entsch described the meeting as “very successful”.
“Minister Hunt committed to working with all the stakeholders, so we now have authority to approach the State Government – in particular, the Queensland Treasurer and Member for Mulgrave, Curtis Pitt MP,” he said.

“We’ll also be asking the Cairns Regional Council and the Mareeba Shire Council to contribute – this threat has to be tackled at all levels, with a non-partisan and multi-pronged approach.”

Ms Ikin said she was pleased to be working with WTMA, Mr Entsch, Minister Hunt, and Senators Macdonald and McGrath to lobby on behalf of the eradication program.

“As Minister Hunt said, this is not just a worthy goal, it is an indispensable goal. I’ll continue to work with the other stakeholders to push for investment at a federal, state and local level because when it comes to yellow crazy ants, doing nothing is not an option.”