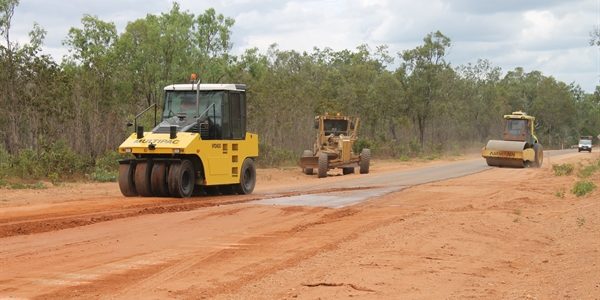 Leichhardt MP Warren Entsch has welcomed the record investment in infrastructure in the 2017-18 Federal Budget, saying it will help to improve connectivity, productivity, and liveability in our region.

The Australian Government is delivering a commitment of $75 billion in infrastructure funding and financing from 2017-18 to 2026-27 for critical airport, road, and rail infrastructure projects.

In Far North Queensland, this includes funding for new and continuing projects:

Cape York Region Package
“There’s great progress being made on sealing the Peninsula Development Road and upgrading/improving access to the remote communities of Cape York. In 2017-18 there’s $54.3 million allocated to further sealing and upgrading of priority sections of the PDR, five sections of the Endeavour Valley Road and delivering community infrastructure projects to nine local government areas on the Cape. At the end of this financial year we’ll be well past the half-way point for sealing the PDR – something I never thought I’d see happen in my lifetime!

Bruce Highway
“Anyone driving south of Cairns can see the progress that’s happening with the Bruce Highway upgrades. The impact of completed works along the Highway with recent flood resilience measures, particularly across the Yeppen Floodplain south of Rockhampton, ensured areas of Queensland were not isolated during the recent floods caused by Cyclone Debbie, and essential supplies and services were able to be delivered. In 2017-18 the Bruce Highway will receive $70.7 million for projects across North and Far North Queensland that will address safety, increase the number of overtaking lanes, widen pavement and make improvements to the Cairns southern access corridor between Robert Rd and Foster Rd.

$600 million Northern Australia Roads Programme (NARP)
“$76.26 million in specialist Australian Government funding has been released to upgrade four key roads in north Queensland to improve safety and power the growth and development of industries, businesses and jobs throughout the entire region. This includes $42.66 million for the sealing and widening of sections of the Kennedy Developmental Road (Mount Garnet to The Lynd to Hughenden, forming part of the Hann Highway), a key election commitment which will help provide an all-weather inland route from Cairns to Melbourne for freight and tourism.

Roads to Recovery
“This funding is vital to help local governments maintain and upgrade local roads. In Leichhardt, 14 councils will share in $5.7 million this financial year.

Stronger Communities Program
“We’ve had two rounds of the SCP in Leichhardt and it’s been an incredible help for local non-profits and community groups. I’m really pleased that an additional $27.7 million will be provided over two years for round three of the SCP so that local groups can access $5,000-$20,000 for small infrastructure projects that deliver social benefits to our local communities.

Community Development Grants
“The roll-out continues on our election commitments throughout Leichhardt and I’m continuing to work closely with successful groups. We’ve recently signed off on the $1.5 million for the Cairns Basketball Facility Expansion and the $24 million upgrade of the Cairns Marine Precinct is not far off. The sod turning for the Port Douglas water supply reservoir is imminent, which is terrific news.

Financial Assistance Grants
“We’re giving our local councils more control over how they want to spend their financial assistance grants, whether it’s on infrastructure, health, recreation, environmental and employment projects. We’re also resuming indexation on the Financial Assistance Grant program from 1 July 2017, which is something that local councils have lobbied for very effectively. This will deliver an extra $836.5 million to councils across Australia over the next four years, and we’re also bringing forward two quarterly payments from the 2017-18 allocation to be paid in 2016-17 – a big boost in the coming weeks.

Regional Growth Fund
“It’s fantastic that we’ve got another fund for local projects to access, specifically those that will have a transformational impact in unlocking significant economic opportunity or a new industry. I’m looking forward to working with proponents when the first round of this $272 million fund opens later this year. We’ll also be strengthening the Building Better Regions Fund, bringing the total investment to $500 million.

Regional Jobs and Investment Package
“The Cairns, Douglas and Yarrabah shires are fortunate to be one of 10 areas nationally to benefit from a local RJIP. The package will help diversify our economy and stimulate longer-term growth and sustainable employment through grants across three key streams: local infrastructure, business innovation and skills and training. The guidelines for RJIP applications have now been published (www.business.gov.au), and our Local Planning Committee is leading the way nationally in developing our local investment priorities, I look forward to applications opening in the near future.