Entsch gives thumbs up to a range of Budget measures 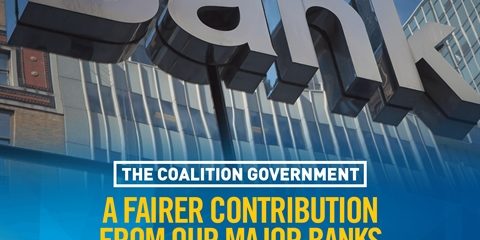 LEICHHARDT MP Warren Entsch has welcomed a range of budget measures which he says add up to a “very positive outcome” for Far Northern families, businesses, regional communities and industry.

“I have to say that to see the projection of a $7.4 billion surplus in 2020-21 is just magic and something that was totally unexpected given the financial situation we’ve been in the for the last few years,” Mr Entsch said. “It gives me a tremendous amount of confidence in what we’re doing and from that perspective I think we should celebrate.

“In regards to specific elements in the Budget, the bastardry of the banks is something I’ve been working on for some time. Far North Queensland was an area that was particularly hard hit when the banks made a decision to exit the region and engineered defaults by good, well-paying customers which sent them broke.

“There’s no question that senior executives need to be held accountable for the actions of their underlings, if they’re faced with deregulation and penalties then good ? that will make them more aware of what’s going on. I’m getting a bit more detail on this ‘one stop shop’ entity for victims though, because I don’t want there to be a ceiling on the amount of compensation that people can access.

“In terms of essential services for families, I’ve had a lot of people coming into my office concerned about getting access to the NDIS. These measures guarantee funding for the NDIS into the future which is something Labor could never do, and this will be a huge relief for the estimated 3,025 people in Leichhardt who will access the NDIS when it is fully rolled out, and their families.

“The other essential is guaranteeing future funding for Medicare ? I think it’s good policy and totally negates all Labor’s misleading campaigns about ‘Mediscare’. We’re also launching a fairer schools funding model that is needs-based, simple and transparent and will benefit every one of the 61 schools in Leichhardt, along with a more affordable, accessible childcare system for the 9,660 families who use Government-supported childcare.”

Mr Entsch said he had copped criticism for coining the term ‘job-snobs’, but welcomed the moves in the Budget to crack down on people who are exploiting Australia’s generous welfare system.

“It beggars belief that in Far North Queensland we have one of the highest levels of youth unemployment in the country, yet we have so many businesses that would not survive without employing backpackers,” he commented.

“People who are receiving the Newstart allowance have an obligation to find a job. It’s not a lifestyle choice. As far as the drug testing, I absolutely applaud it. Who in their right mind would employ someone if they were high? If they are caught with a positive drug test, their welfare will be quarantined and they’ll have to undergo further drug testing to help curb the devastating effects of drug addiction on themselves, their families and the community.

“A cashless debit card is one option that could be used so that we’re not taking away their ability to survive, but they won’t get hard cash from the taxpayer to do so.”

Mr Entsch applauded the decision to reinstate the Pensioner Concession Card for those seniors who lost it as a result of the reforms that started in January, along with measures to boost housing affordability, provide ongoing funding for homelessness, a more balanced approach to higher education funding, and the extra support for veterans in accessing mental health services.

“I’m also glad that the instant asset write off for small businesses has been extended for a further twelve months which is great news for the more than 18,400 small businesses in Leichhardt. The upping of the turnover limit to $10 million also means more local businesses will qualify.”

Mr Entsch said the ACCC monitoring of residential insurance prices in the Far North “was another piece in the puzzle” that would help put downward pressure on premiums.

“The fact that the ICA has objected to it means we must be doing something right, but there is far more that needs to be done and this is something I’ll continue to be very active on.”

The MP is seeking more detailed information about the impact of Budget measures on the tourism industry in particular, and has had early feedback from local employers of foreign workers about the impost of contributing to the new Skilling Australians Fund from March 2018.

“There is of course a huge amount of information in the Budget which will take some time to go through, and if there are any unintended consequences then I will be the first to speak out and I’ll certainly work with affected sectors to get a positive outcome,” Mr Entsch ended.