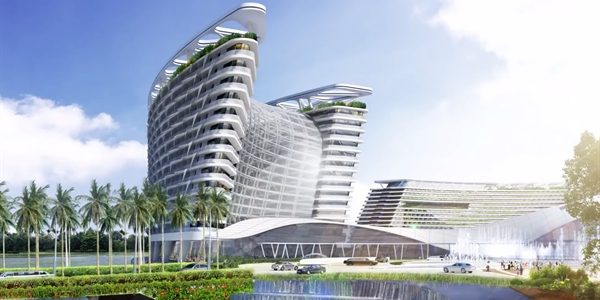 LEICHHARDT MP Warren Entsch has welcomed the Federal Government’s decision to approve the Aquis Resort and Casino at Yorkeys Knob, describing it as “fantastic news”.
“To me it was always a no?brainer,” Mr Entsch said today. “The net benefits are clear, not only from an environmental perspective but also from an economic perspective.
“The decision by the Environment Minister’s delegate clears another hurdle. Now we can look ahead to a decision on the gaming licence, which I understand the State Treasurer is currently working on; hopefully that’ll come sooner rather than later.”
Mr Entsch said he was confident that the 13 strict conditions imposed on the project, aimed at mitigating potential environmental impacts and protecting the Great Barrier Reef World Heritage Area, will not be viewed as a deterrent by the proponents.
“I can’t see that they’ll be an impediment to the development, in fact from the information that I have, the proponents already plan to meet or exceed many of the conditions that have been set.
“Of course, the Great Barrier Reef is an absolute icon and this Government is putting the health of the Reef before all else.
“What this decision shows is that you can have coastal development ? and the economic benefits that follow ? driven by careful and informed environmental management.”
Mr Entsch noted that the conditions would result in a 45 per cent reduction in nutrient run?off from the site ? significantly improving water quality entering the Great Barrier Reef from the currently degraded agricultural land.
“There are also conditions around minimising visual impacts, maintaining biodiversity, rehabilitating areas with plants and trees, and keeping the aquaculture ponds so that migratory birds aren’t disturbed.”
The project is expected to create up to 3750 construction jobs in stage one, 3500 construction jobs in stage two and 20,000 jobs when the resort is operating.
It will also generate up to $988 million in Gross Regional Product during the construction of stage one and $10.283 billion at full operation.
“There is still a long way to go, in that the Fung family now have to come back to the Minister with detailed information outlining how they’ll meet each of the conditions,” Mr Entsch said. “They also have to lay out the trigger points for assessing the net improvement to water quality, and the actions that will be taken if these aren’t being met.
“Nevertheless, today’s decision is fantastic news for the community and I congratulate the Environment Minister’s delegate for this major step forward.”