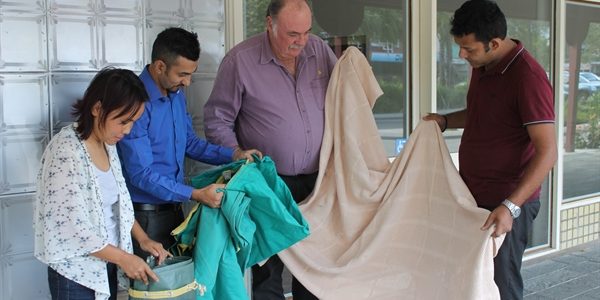 FEDERAL MP Warren Entsch is urging Far Northerners to do what they can to help victims of the Nepal earthquake by donating spare blankets, clothing (including children’s and babies clothing), tents and umbrellas to a local community group.

Mr Entsch met with members of the FNQ Nepali Community earlier this week, some of whom have lost family and friends and whose homes have been destroyed.

The Leichhardt MP has thrown his support behind their efforts to gather donations of money and goods that will be of urgent need to people who have been injured and lost their homes in the 7.8 magnitude earthquake.

“The Far Northern community can be extraordinarily generous when people are in need, and there’s no doubt that the humanitarian crisis that’s taking place in Nepal is profound,” Mr Entsch said.

“The group needed a central, secure location where people can drop off the donations so I called Cairns Regional Council Mayor Bob Manning to ask about one of the council-owned buildings in the CBD, and he was immediately supportive.”

Late yesterday, Mayor Manning confirmed that council would allow the group to use the former Cairns Historical Society premises in the School of Arts building at City Place for four weeks.

“This is fantastic news and my heartfelt thanks goes to Mayor Manning and council for acting so quickly on this – it means that people can start donating straight away while the need is greatest.”

Avishek Singh, Shailendra Amatya and Ang Furba Sherpa were among those who met with Mr Entsch on Monday.

“The Nepalese community here in Cairns is devastated,” Mr Amatya said. “Everyone is very worried about what is happening over there. Communications are down, there are aftershocks, rain, landslides… we can feel the pain of those who are suffering in our country.”

Mr Amatya said the death toll has now reached 5000 people and this figure is expected to reach 10,000. “People are without houses, food, shelter, water, basic needs; they are asking for our help,” he said.

“There are a number of places where help hasn’t reached,” added Ms Sherpa. “People are still trapped and being found alive.

“Nepal is a developing country and doesn’t have many resources for situations like this,” she said.

In addition to the donations, the group is seeking assistance from freight operators who are able to assist with transporting the goods to Sydney. From there, airlines are carrying the goods to Kathmandu free of charge. The group also wants to hear from any travellers who are flying to Nepal, as airlines are reportedly allowing passengers to take extra luggage if it includes aid items or donations of goods.

Mr Singh said the appeal is one of a number of initiatives planned by the group, including fundraising food stalls at JCU. Importantly, on Friday evening between 6-7pm, they will be holding a candlelight vigil on The Esplanade in Cairns in memory of those who have lost their lives.

At the event, candles will be sold to raise money for the appeal. Please check for updates and details of the exact location of the vigil via the group’s Facebook page, Nepal Earthquake relief initiative- FNQ Nepali Community

– The School of Arts Building will be open for drop-offs from TODAY, Thursday 30th April, from 9am-4pm daily.

– Cash donations to the appeal can be made through the Nepali Community Organisation bank account, details as follows: