51st Battalion, we salute you! 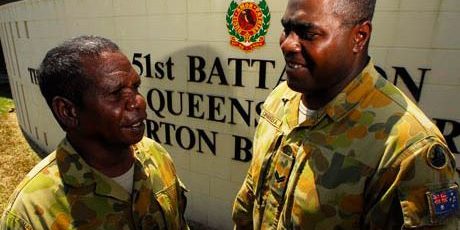 THE illustrious history and ongoing activities of 51st Battalion, Far North Queensland Regiment, have been highlighted in Parliament this week by Federal MP Warren Entsch.

“In this Centenary of Anzac, one battalion that deserves recognition is the 51st Battalion, Far North Queensland Regiment, which celebrated 100 years of service at the weekend with a parade down the Cairns Esplanade,” Mr Entsch told Parliament.

“The battalion was formed in Egypt in 1914, but their role has changed profoundly since then.

“It was in the early 1930s that they first became based in Cairns. Since 1985 they have been the ears and the eyes of the north, conducting reconnaissance and surveillance activities across Cape York and the Torres Strait. One-third of their personnel are Indigenous, and they are presently commanded by Lieutenant Colonel Ben Toyne.”

“George is a decorated Vietnam veteran who was awarded the Member of the Order of Australia for his leadership through various natural catastrophes, from Cyclone Tracy and Cyclone Althea to the Brisbane floods,” Mr Entsch said. “He also put his battle skills from Vietnam to the test when fighting locust plagues in western Queensland.

“George is the author of such classics as The Mad Galahs and The Spirit of Australia. He became an honorary colonel of the 51st Battalion and continues to share his military experience by lecturing each graduating cohort at the Royal Military College, Duntroon.

“Brigadier George 'Warrie' Mansford is a man we respect and admire. I say to Warrie Mansford: we salute you, and we thank you for your service.”