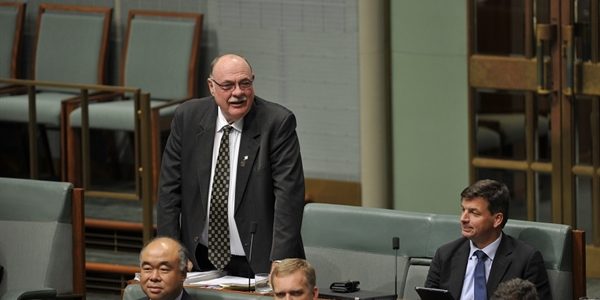 LEICHHARDT MP Warren Entsch has described himself as “amazed and honoured” at being awarded the title of Back Bench Politician of the Year by the Australian Political Studies Association.

The Australian Political Studies Association is the national association for Political Scientists and International Relations specialists in Australia.

This year, APSA has decided to launch a series of Annual Awards to highlight the achievements of those in the political sphere.

The Back Bench Politician of the Year award recognises back-bench parliamentarians who make outstanding contributions to the Parliament.
In making its decision, the APSA assessment panel stated:

“At a time when there is significant public disenchantment with Australian politicians, the panel was eager to present this award to a politician of integrity and conscience.

“The Hon Warren Entsch, Federal Member for Leichhardt, is the model parliamentarian. His reputation for being both extremely responsive to the interests of his constituents and a conviction politician has placed him in a position of high regard both at the local and the federal levels.

“He has worked on some of the most contested policy issues of our time (e.g. Native title, Water), and held senior positions in parliament and has always behaved with great insight, diligence and dignity.

“In sum, Warren Entsch is a great parliamentarian because of his capacity to act with consistency, frankness and sincerity.”

Mr Entsch said he was very disappointed that he won’t be able to attend the award ceremony, which takes place at Old Parliament House in September when he is on an overseas delegation.

“But I’d like to express my gratitude to the APSA for this recognition – it really does mean a huge amount to me,” he said.

“I tend to put myself out there on issues that might not win me many votes, but are the right thing to do – things like medicinal marijuana, LGBTIQ rights, mental health and tuberculosis.

“I also try to take new MPs ‘under my arm’ in Parliament – part of my role as the Patron of the ‘Class of 2013’ is to help new members and provide them with a bit of guidance when they need it – similar to when I was the Whip.

“It’s a real pat on the back to get this recognition and I’m quite thrilled.”
Other award winners include:

The APSA was formed in 1951 and has a long history, with around 500 members across Australia. This year’s conference will attract more than 350 delegates from Australia and overseas.