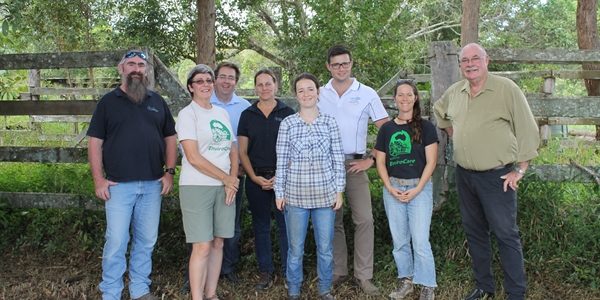 At Friday’s Wet Tropics Management Authority Ministerial Forum, the Federal Minister for the Environment and Energy, Hon Josh Frydenberg MP, and the State Minister for Environment and Heritage Protection, Hon Dr Steven Miles, agreed that WTMA should drive the activities.

“This is fantastic news and an important step forward,” Mr Entsch said. “I sat down with Minister Frydenberg in Canberra a couple of weeks ago to explain why WTMA’s involvement is so critical on this issue and I’m very pleased that he has recognised this.

“Now that Queensland and the Commonwealth are on the same page, the Federal Department of Environment can start to negotiate the funding agreement with WTMA.”

Mr Entsch said he’d been in contact with Lucy Karger, Manager of the Yellow Crazy Ant Eradication Program, since the election about the funding commitment.

“Lucy and other stakeholders such as local landowner Frank Teodo are very pleased and relieved that this key step has been reached.

“I had no doubt that WTMA had the capacity and capability to upscale and drive this program successfully, and to build on the very positive relationships they’ve established with community members and industry.”

$7.5 million from the Federal Environment portfolio will go towards on-ground action that makes a real difference in managing Crazy Ant populations. A further top-up of $1.3 million from the Commonwealth will be managed by the Federal Department of Agriculture and Water Resources for broader extension work and tramp ant management.

“The $1.3 million is to build skills and capabilities among landholders and key agricultural and industry organisations,” Mr Entsch said. “The first tranche of this funding has already been delivered with the second tranche due in the first half of 2017.

“I hope that through these funding streams, groups such as Kuranda Envirocare can continue to be resourced to build their capacity. They are on the front line and doing a fantastic job on very limited resources.”

Mr Entsch said a concern in the delivery of the election commitment was a suggestion from some sectors to give the money to Biosecurity Queensland, a suggestion he strongly denounced.

“Given the extensive work already carried out by Lucy and her team, the evidence of their successes and their comprehensive eradication proposal it’s a no-brainer that WTMA should be the lead agency,” he said.

“WTMA has seen some important wins in recent surveys with three YCA infestation sites on track to declare eradication. In another 12 months, if Yellow Crazy Ants continue to be absent at one of these sites (which is highly likely I’m told), they can formally declare the pest eradicated from that particular site.

“WTMA’s work has also identified important research priorities and scientific discoveries about YCA that were otherwise unknown within YCA networks. This is valuable information and will help agencies in the future to carry out best-practice activities.”

WTMA has funds to continue activities through to April/May 2017 however Mr Entsch said he would like to see the agreement signed off by early next year to provide certainty to WTMA.

Minister Frydenberg has previously written to the Queensland Government requesting a commitment of $4.5 million to support the eradication plan. Queensland has currently committed $3 million to the initiative and recently provided $1.013 million of the funding to WTMA for 2016-17.