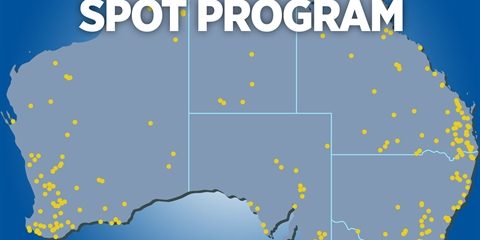 “Improved mobile coverage for Cape Tribulation will be fantastic for tourism given that visitors to the region expect to be able to share their experiences as they travel. Businesses and residents at both Cape Tribulation and Whyanbeel have been active in lobbying for this result and I congratulate them on their success.

“The new coverage at Ayton extends the footprint of mobile coverage from Wujal Wujal, which is an important safety issue for people travelling the route through to Cooktown, and a new tower at Hutchinson’s Road near Keatings Lagoon fixes this known black spot just south of Cooktown.

“Injinoo has also had patchy reception at best so I’m looking forward to being able to experience much better call quality in the future.”

Round 2 of the Coalition’s Mobile Black Spots Program will deliver new or upgraded coverage to 6500 homes and business across 17,500 square kilometres via 266 new or upgraded towers. This includes 1900 kilometres of major transport routes.

“Labor did not help build a single mobile phone tower nor invest a single cent in mobile coverage in six years of Government. I’m proud to be delivering better mobile coverage to the Far North,” Mr Entsch said.

“In total, Rounds 1 and 2 of the Coalition’s Program will deliver new coverage to 32,000 homes and businesses across 86,000 square kilometres including 7600 of major transport routes via 765 new mobile phone towers,” Minister Nash said.

“I aim to help build the kinds of communities our children and grandchildren either want to stay in or come back to, and better mobile phone coverage is a big part of that.”

Mr Entsch said that including co-contributions from carriers and state governments, Round 2 represents a total new investment of $213 million towards improved mobile coverage.

The locations for round 2 of the Mobile Black Spot Program were selected following an appeal to the public to nominate black spots.

These locations were entered into the national map which was provided to mobile network providers to assist them to develop funding applications. These were assessed against the program guidelines by the Department of Communications and the Minister accepted the Department’s recommendations without change.

“The new base stations in Leichhardt, which will be built by Telstra and Optus, are due to the efforts of the community in identifying black spot locations and advocating for them to be fixed,” said Mr Entsch.

“Many thanks to all those who took the time to contact my office, and also any local councils or organisations that made a co-funding contribution to the cost of the new towers.”

The locations of all of the 266 base stations can be found on the national map at www.nationalmap.gov.au.

Rollout time frames are dependent on a number of factors such as obtaining local government planning approval, landowner agreement where necessary, and/or the ability to access existing infrastructure, power and backhaul.

Successful black spots under Round 3 were announced during the 2016 election campaign, based on MP’s priorities for upgrades in their electorate. In Leichhardt Mr Entsch announced that the locations of Weipa, Mt Carbine, Cape Tribulation-Daintree and Wonga Beach along the Mossman-Daintree Rd. Cape Tribulation has been successful under Round 2 and it is expected that a competitive assessment process to allocate Round 3 funding will commence in 2017.

More information about the Coalition Government’s Mobile Black Spot Program can be found at www.communications.gov.au/mbsp