Water security for jobs and growth in the Lakeland Basin 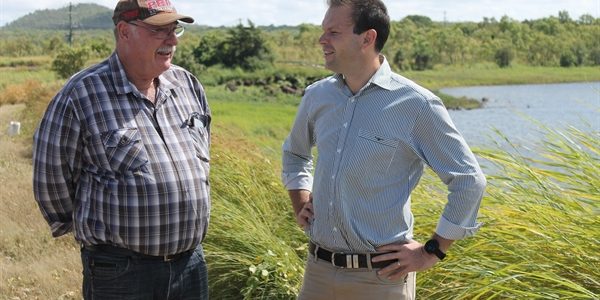 The Coalition Government is getting on with the job of delivering our water infrastructure needs, today announcing $825,000 to fast-track a feasibility assessment of the Lakeland irrigation area.

Deputy Prime Minister and Minister for Agriculture and Water Resources Barnaby Joyce made the announcement today as part of a $150 million funding commitment to fast-track the feasibility assessment and construction of water infrastructure across Queensland.

“The Coalition is expediting the planning work required to get water infrastructure projects shovel-ready because we are serious about ensuring water infrastructure gets built as quickly as possible, to help support strong regional economies and communities,” Minister Joyce said.

“This work is a key part of the process, detailing the feasibility, economic returns and sustainability of this project, as we identify the best sites to deliver new water infrastructure.”

“This work is a key part of the process, detailing the feasibility, economic returns and sustainability of this project, as we identify the best sites to deliver new water infrastructure.”

Mr Entsch said the study would involve an independent feasibility assessment for an improved water supply for the Lakeland Basin region.

“Today’s announcement is absolutely fantastic news, it brings us a step closer to being able to fully realise the opportunities that abound at Lakeland Downs.

“This is something I’ve been working on for a long time, along with organisations who share this vision such as Cape York Sustainable Futures, the Lakeland Progress Association, Cook Shire Council, and a special mention to David Kempton for the work that he has put in.

“It’s also exciting because it’s the second major water commitment for our region.  Up to $5 million has already been committed for a detailed examination of the economic feasibility of Nullinga Dam under the National Water Infrastructure Development Fund, which was announced in the White Paper on Developing Northern Australia.”

“Northern Australia has 17 million hectares of arable soil and receives 60 per cent of the nation’s rainfall — of which we use less than 2 per cent,” Minister Canavan said.

“We need to build dams to develop the north. Water is life up here. Water brings industry, jobs, growth and, most of all, people. Our plan will deliver jobs and growth for the north but it is also important for the rest of the country. When our north grows, so does the rest of Australia.

“With the legislation for the Northern Australia Infrastructure Facility now through parliament, and Cairns announced as its headquarters, funding dams and other transformative infrastructure in the north is now a reality.”

Minister Joyce said the Coalition was delivering on its $2.5 billion commitment to building the water infrastructure of the future.

“It’s the right time for our significant investment in water infrastructure. A transitioning economy and growing global demand for agrifood products mean this is a time of unprecedented opportunity for our agriculture sector,” he said.

“As the economy transitions and diversifies, agricultural exports are playing a more important role than ever in our nation’s economy and prosperity.  Rural exports have already overtaken coal to become our second-largest export after iron ore.

“The Coalition is taking action by carrying out the most significant investment in infrastructure in Australian history, including through the roll-out of our $15 billion water reform agenda, so we can make the most of these opportunities.