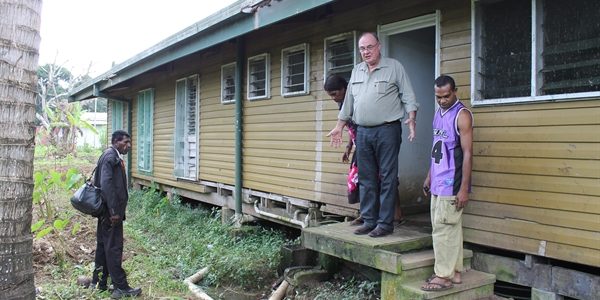 QUEENSLAND LIBERAL MP Warren Entsch has revealed his dismay at the spiralling tuberculosis crisis in Papua New Guinea, responding to reports yesterday that health experts are calling for TB to be declared as a public health emergency in Australia’s closest neighbour.

The move follows the release of a study carried out by the PNG Institute of Medical Research, which found that many people in rural areas were dying from the disease without ever being diagnosed.

“This is a wakeup call,” said Mr Entsch, whose electorate of Leichhardt includes the Torres Strait Islands ? some of which are within 4km of PNG’s Western Province coastline.  “The situation is out of control and it’s clear that the reported rates of detection are totally skewed.

“I’ve been raising this issue since 2010 and even made a personal representation to the then-Minister for Health, Tanya Plibersek, who did nothing.

“We knew the figures that AusAID was reporting about the rates of detection and treatment weren’t correct as none of the data was ground-truthed or verified.

“When Senator Jan McLucas took a trip up there and stood in the new TB ward, she must have been manipulated by the bureaucracy to be able to come back here and say that everything was fine.

“Everything was clearly not fine ? Labor should be condemned and accept some responsibility for the many deaths that have occurred, including that of an Australian citizen on Saibai Island.”

Mr Entsch has been provided with information this week that health workers at Daru Hospital are very concerned that they have no protection from the TB outbreak.

“There’s basically been a revolt ? they no longer wanted to nurse the 64 current TB patients, who were then discharged back to their villages or onto the streets of Daru,” he explained.

“Most of them have now been rounded up and returned to the hospital, but the health workers are very upset. Many have developed TB, they don’t feel like they have support and they’re living in squalid conditions.

“I travelled to Daru myself in 2012 to see the appalling situation and one of the issues that really stood out was the dilapidated and dangerous condition of the staff housing.

“This was widely reported when I returned to Australia and it’s unacceptable that despite millions of dollars in aid going on TB programs in the Western Province, nothing has changed.”

He added that key stakeholders are currently working on a plan for improved delivery of TB assessment and treatment programs into the Western Province, and welcomed the support shown to date by the Minister for Foreign Affairs, Julie Bishop.

“This disease is not only killing people in the Western Province of PNG, but it poses a real threat to the residents of the outer islands of the Torres Strait – I’m relieved it’s no longer being ignored.”