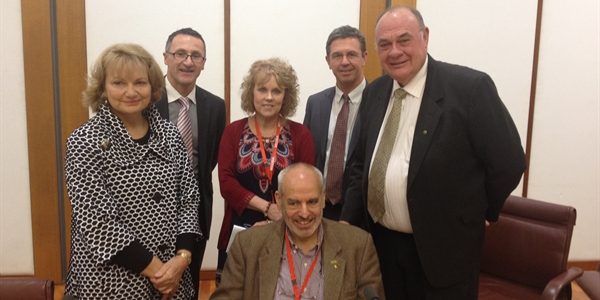 LEICHHARDT MP Warren Entsch has thrown his support behind a multi-party group of federal MPs who are pushing to make cannabis legally available for medicinal purposes.

Mr Entsch has joined the Parliamentary Group on Drug Policy and Law Reform, convened by like-minded members across four parties, to prepare a draft of policy recommendations with the intention of legalising cannabis for medicinal use.

“I come from a position where I’ve been fiercely opposed to the recreational use of cannabis; I’ve seen firsthand the terrible impacts that come from chronic use,” Mr Entsch explained.

“But when you have a look at the profound improvement in the quality of life for people who are suffering from severe epilepsy or undergoing chemotherapy, you can’t argue against the benefits.”

At the launch in Canberra, drug policy reform advocate Dr Alex Wodak told the Group about trials of cannabis oil for epileptics who were suffering thousands of fits a day.  When they started using the drug, the number of fits was drastically reduced to less than 10 or 20 a day.

“The reality really hit home when I met Lucy Haslam, whose 24-year-old son Dan has cancer and uses cannabis ? illegally ? to treat the awful nausea he gets from undergoing chemotherapy,” Mr Entsch said. “It’s the only thing that has enabled him to regain weight, and retain an element of hope.”

Mr Entsch also spoke of his brother-in-law, who died of aggressive MS at 31 years of age.

“Towards the end of his life he started getting horrific shakes and the only way he could find relief was through using cannabis.

“Being aware of his situation, and hearing the profound way that cannabis has helped young Daniel and people with epilepsy, we can’t deny them this reprieve from suffering when all else fails.  As a parent I would do it in a heartbeat.”

Mr Entsch said the new group was in no way advocating for recreational use of the drug but recognised that policy makers had to be practical.

“We grow coca and poppies in Australia and both of those plants produce compounds that are used to treat pain, so why would it be any different for cannabis? There’s no reason it can’t be grown under license for the production of oil, approved by the Therapeutic Goods Administration, prescribed by doctors and dispensed by pharmacies.

“I’ve given it a lot of thought and have committed to becoming a very strong advocate for this campaign, to help it become a reality.

“At the end of the day, I’d hate to see people tagged as criminals because we don’t have the flexibility to be able to recognise the positive and scientifically proven benefits of this natural substance.”