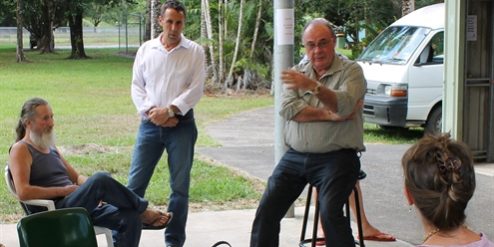 FLOOD-PRONE roads in Douglas will benefit from upgrades thanks to funding announced today by Federal Member for Leichhardt Warren Entsch and the State Member for Cook David Kempton.

Mr Entsch and Mr Kempton jointly announced $860,575 for Douglas from the Natural Disaster Mitigation Program, to raise two existing causeway crossings at Degarra and to upgrade and/or replace causeways and bridges around Mossman.

The works will help to increase flood immunity at the crossings, as well as providing better access for disaster recovery services and emergency vehicle access after disaster events.

“This is great news for the Douglas Shire; unfortunately residents know all too well how it feels to be cut off from key transport routes,” Mr Kempton said.

“Degarra gets isolated on the southern side of the Bloomfield River after bad weather and in Mossman there was significant flooding after Ita.  In the days after a natural disaster or severe event, it’s vital that access can be restored as soon as possible for emergency services, residents, business owners and tourism operators.”

Mr Entsch said Douglas Shire Council had been collaborating with adjoining councils to coordinate infrastructure upgrades, plan for the relocation of council resources after disaster events and to help build collective resilience.

“By working with nearby councils, projects have been identified which reflect the needs of the catchment as a whole,” he commented.

“These upgrades will make a big difference in improving evacuation routes and increasing flood immunity for the road networks within the area.”

Federal Minister for Justice Michael Keenan said while the nature and size of the country’s landscape meant that natural hazards were a fact of life in Australia, more needed to be done to manage natural disaster risks.

“The Australian Government is supporting the states and territories as they assist those recovering from natural disasters, and we are focused on boosting the resilience of communities to future events,” Mr Keenan said.