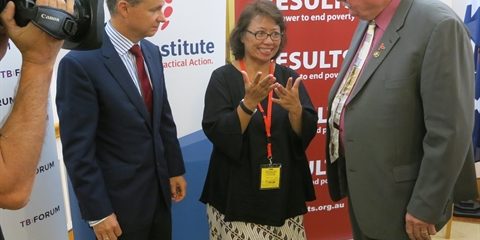 The Australian TB Caucus welcomes the call from G20 leaders on the weekend for a new platform to incentivise research and development to tackle drug-resistant infections ? specifically in relation to the threat of tuberculosis (TB), which accounts for a third of deaths globally from drug resistance.

As the world’s leading infectious disease killer and the only airborne drug-resistant infection, TB is the nexus of the growing crisis of antimicrobial resistance (AMR), when organisms no longer respond to available drugs.

The Leaders’ Statement also singled out the need for innovative mechanisms to address what is known as market failure in relation to AMR ? and TB in particular. Market failure can be described as the inability of standard commercial drug-developers to produce the new preventives, diagnostics and treatments required for certain diseases.

“This year’s G20 Summit provided the world’s strongest economies with an opportunity to reset efforts to end tuberculosis, a disease that perpetuates poverty, and curb the rising tide of drug-resistance,” said Warren Entsch MP, Co-Chair of both the Australian TB Caucus and of the Asia-Pacific TB Caucus.

The Caucuses are part of a global network of parliamentarians, with 2300 members in over 130 countries, working to transform the response to TB and end the global epidemic of the disease.

“It was both important and encouraging to see a commitment to find new ways to fund the development of innovative TB-related products. One of the major drivers of TB today is the fact that treatments are still so tough. To cure standard TB, patients have to take 4 000 pills over the course of six months, and people with drug-resistant TB suffer 18 months of treatment: a total of 14 000 pills and six months of daily injections. The world can do better for people with TB, and this new R&D platform will help make that possible,” said Matt Thistlethwaite MP, Co-Chair of the Australian TB Caucus.

“With a global push we’re hopeful that a TB vaccine that works for everyone can be found sooner rather than later,” he added.

Australia is a regional leader on TB: although our national rates are among the lowest in the world, the Asia-Pacific region is home to more than 60 per cent of the world’s TB burden. PNG, our nearest neighbour, has some of the highest rates of MDR-TB in the world.

“Prime Minister Malcolm Turnbull did a fantastic job pushing for action on TB at the G20, knowing the impact it has in our region. He built on the work Minister Hunt did for championing the issue of TB in relation to antimicrobial resistance, and of Minister Wyatt in going to Berlin last month to give Australia’s full support for inclusion of this important message in the Health Ministers’ Declaration,” said Mr Entsch.

“We look forward to Australia’s continued engagement on TB at international meetings over the next 18 months, culminating in the UN General Assembly’s High-Level Meeting on TB late next year. The Australian government has shown great foresight and leadership on this important regional and global issue and it is good to see this now impacting globally, We’ll have lot of opportunities to bring attention to TB in the year ahead and with the Asia Pacific carrying 60 per cent of the world’s TB burden we can’t afford to be complacent,” Thistlethwaite added.