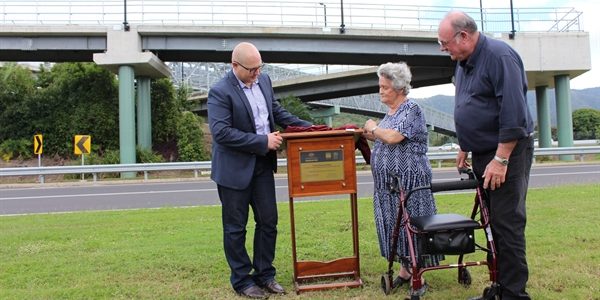 THE service of the nation’s most highly decorated Australian-Chinese soldier to serve in World War I has been recognised today, with a new pedestrian bridge on the Bruce Highway at White Rock officially commissioned and named in his honour.

Federal Member for Leichhardt Warren Entsch was onsite today for the official commissioning and naming of the Caleb Shang Bridge.

“Shang is often described as ‘the greatest of Cairns soldiers’ and it’s wonderful to see one of our local heroes acknowledged today,” Mr Entsch said.

“The pedestrian overbridge was built as part of the $150 million Cairns Southern Access Stage 1 (Sheehy Road to Ray Jones Drive) Upgrade, which was fully funded by the Australian Government.

“Meanwhile, work is continuing on Stage Two of the Cairns Southern Access Corridor project between Robert Road and Foster Road, with the Australian Government committing up to $46.4 million towards the $58 million project, with the Queensland Government funding the remainder.”

Queensland Treasurer and Member for Mulgrave Curtis Pitt said he was pleased to help commemorate the ANZAC Centenary by naming transport infrastructure after admirable characters like Shang.

“More than 57,700 Queenslanders enlisted in World War One, with many of them making the ultimate sacrifice for their country with their lives,” Mr Pitt said.

“During World War II, at the age of 57, Mr Shang once again enlisted, this time in the 17th Battalion, Volunteer Defence Corps in Cairns.

“The Cairns RSL established a permanent memorial to Shang in 2016 as part of the annual Remembrance Day celebrations.”

Caleb Shang joined the 47th Battalion in 1917 and took part in a number of well-known battles including the Battle of Passchendaele.

In 1918, he fought around Dernancourt on the Somme in France where he showed great bravery acting as a ‘runner’ through barrages and fire swept areas, carrying water and ammunition to the front line.