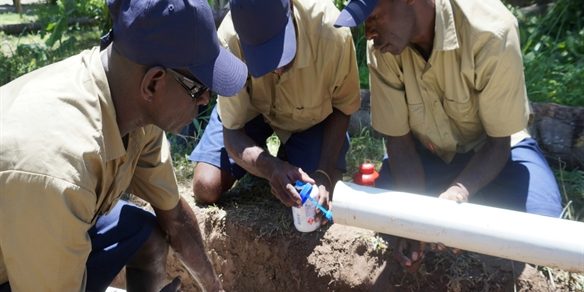 AN aid program designed to build up skills and infrastructure in disadvantaged communities on the border between Papua New Guinea and Australia is making good progress, with training provided to 53 local Community Rangers set to benefit more than 21,700 people.

The Treaty Village Resilience Program was launched in November 2014 with funding from Australian Aid and is run by the Reef and Rainforest Research Centre (RRRC), a Cairns-based environmental non-government organisation that manages and directs environmental protection projects in the Great Barrier Reef, Wet Tropics Rainforest, Torres Strait, Papua New Guinea and elsewhere.

Currently in its pilot phase, the Treaty Village Resilience Program aims to tackle barriers to clean water, sanitation, food security, and development in the villages of Mabaduan, Sigabaduru, Buzi/Berr and Sui/Parama in PNG’s South Fly region.

These communities are part of the 13 villages that are included in the Torres Strait Treaty between Australia and PNG, with a population of over 21,700 people.

Free travel for traditional purposes is allowed between the Treaty Villages and the islands of the Torres Strait, making them a key focus area for Australia’s efforts against diseases such as tuberculosis.

The Resilience Program is modelled on the successful Community Ranger Programs rolled out across northern Australia. It involves the training of 52 local PNG Community Rangers, with the aim of building self-reliance within the Treaty Village communities and strengthening community capabilities.

Four boats custom-built in Cairns and the construction of a training facilities and community water infrastructure further add to the effectiveness of the program.

The Australian Government has provided $1.85 million in funding for the Resilience Program, while the Reef and Rainforest Research Centre (RRRC), an environmental NGO based in Cairns, has invested an additional $400,000.

Cairns-based training company INLOC has partnered with RRRC to provide training expertise for the program.

The Community Rangers, who are selected from their home villages by clan elders, are being trained in community-building skills focusing on sanitation, leadership, first aid and food security at a specially-built facility on Poah Island, near Maduaban village.

12 of the community rangers are female and will also be trained in birth assistance, paediatric health and women’s health.

Three tuberculosis awareness events have also been provided to a total of more than 500 people in Buzi/Berr, Mabaduan and Sigabduru.

In July, the implementation phase of the program will begin, with the community rangers starting practical and educational programs in their own and neighbouring villages, focusing on water and sanitation hygiene (WASH), TB awareness and women’s health.

RRRC managing director Sheriden Morris said the Treaty Village Resilience Program was an important move for assisting development on the PNG-Australian border, and reflected the skills available in Cairns for tropical development.

“This is an exciting program that draws on the tropical expertise of the Cairns region,” Ms Morris said, “INLOC are partnering with RRRC to deliver world class training in skills and capabilities directly into the villages, strengthening village leadership and creating opportunities for the future.”

Federal Member for Leichhardt Warren Entsch spoke in support of the project, particularly of the RRRC’s and INLOC’s involvement.

“The RRRC has done more in the last 12 months than many NGOs have done in the last 10 years, and they should be applauded for it,” said Mr Entsch.

“What they’ve effectively done, with the support of INLOC, is give the villages ownership of the solutions.

“While we always talk about tuberculosis and other diseases that have a profound impact on the community, the RRRC have identified the fact that these are diseases of poverty and that health solutions will only work if you fix the living environment – improving sanitation, water quality, food security and other issues.

“I’m looking forward to the next phase when we look at creating micro economies in the villages. I’ll continue to work very closely with the RRRC to ensure that these initiatives continue and expand across the region,” said Mr Entsch.