Our commitment to greater protection for turtles and dugong passes parliament 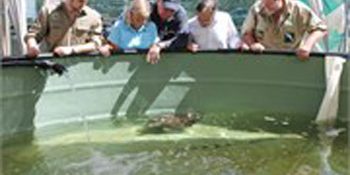 TURTLES and dugong have stronger protection from today after the Parliament passed new laws tripling penalties for killing or injuring these threatened species.

“The amendments are in response to concerns about ongoing illegal poaching and trading of turtles and dugong and are part of a broader suite of initiatives to manage and protect our World Heritage listed Great Barrier Reef and its wildlife,” said Minister Hunt.

“There are now increased criminal and civil financial penalties for killing, injuring, taking, trading, keeping or moving a turtle or a dugong in a Commonwealth marine area, and for taking or injuring turtles and dugong within the Great Barrier Reef Marine Park.”

The Environment Legislation Amendment Bill 2013 amends various sections of the Environment Protection and Biodiversity Conservation Act 1999 and the Great Barrier Reef Marine Park Act 1975 to provide additional protection for turtles and dugong under both Acts.

Federal Member for Leichhardt, Warren Entsch, welcomed the increased penalties which will serve as a greater deterrent to illegal activities threatening turtles and dugongs.

“The increasing concern, particularly in Far North Queensland, regarding illegal poaching and trading of turtles and dugongs requires a serious response. These turtle and dugong amendments implement an election commitment and are a key part of our Dugong and Turtle Protection Plan,” said Mr Entsch.

“Importantly, the new laws will not impact on native title holders’ rights.”

“This is another step in my journey of getting an appropriate level of protection for turtles and dugongs. Now that we’ve got these measures in place, I’ll continue to work closely with indigenous Rangers in my region to protect turtles and sea birds in places like Green Island and Michelmas Cay.”

Through the new Reef Trust, the Government is providing $5.3 million towards the plan, which also includes:

·         $2 million for the Australian Crime Commission to understand the nature and extent of environmental crime and, where applicable, intervene against illicit wildlife traffickers

·         a $2 million Indigenous Specialised Ranger Programme to improve traditional management and compliance around turtle and dugong in Queensland.

·         a $700,000 Marine Debris Initiative to relieve turtles and dugongs, as well as other species, of the impacts of rubbish in the marine environment

·         an Australian Government injection of $600,000 to the Cairns and Fitzroy Turtle hospital to support continued care for injured turtles. This is a doubling of the original commitment of $300,000.

Safeguarding our iconic reef species is part of our commitment to improving the health of the Great Barrier Reef and ensuring its long term protection.

The Government is committed to the protection of threatened species, which is why we recently appointed Australia's first Threatened Species Commissioner to bring a new national focus to the conservation efforts for Australia's endangered native flora and fauna.

The Government has committed $40 million to the Reef Trust, which is now delivering projects along the Great Barrier Reef that improve water quality and enhance the protection of threatened and migratory species.

“I would like to thank Warren Entsch, Colin Riddell, Rupert Imhoff and the Traditional Owners for their strong commitment to the protection of turtles and dugongs, and for their determination to see this legislation passed,” said Minister Hunt.

“This now means the government has passed significant environmental legislation with the support of the Greens (for turtle and dugong protection), Labor (for the Green Army) and the crossbench (for the Emissions Reduction Fund and carbon tax repeal).”