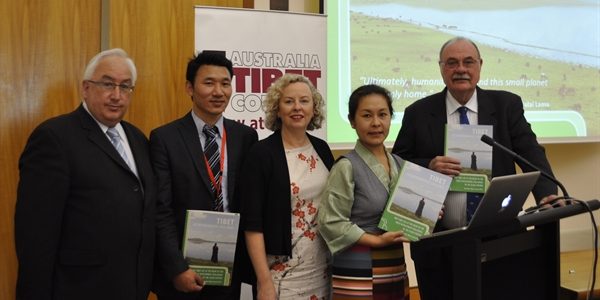 Australia Tibet Council has today released a new report Tibet – An Environmental Challenge in Canberra as part of its campaign to broaden understanding of the significance of the Tibetan plateau in today’s world.

This 40-page report, released ahead of the UN Climate Conference in Paris in December, looks at Tibet as the source of Asia’s major rivers, the impacts of climate change in Tibet, its strategic location between China and India, China’s exploitation of mineral resources and the effects of the rapid changes to the nomadic way of life.

Despite Australia’s proximity and growing interdependence with Asia, few Australians recognise the immense environmental and geostrategic significance of this part of the world. Popular understanding of the Tibet issue tends to be confined to well-documented human rights concerns.

“This misconception represents a profound gap in the Australian government and public understanding of Tibet. If we are concerned about climate change, inequality, and food and water security, we need to pay closer attention to Tibet. Most importantly, we need to recognise that the Tibetan people can be part of the solution.” said Kyinzom Dhongdue, campaigns manager at Australia Tibet Council, speaking at the launch of the report in Parliament House.

Key members of the Australian All-Party Parliamentary Group for Tibet have endorsed the report. Hon Warren Entsch MP, Chair of the Group, said: “This report gives a powerful insight not only into the full significance of Tibet in today’s world, but why we must finally start listening to those who truly know and understand this uniquely important land – the Tibetan people.”

Senator Lisa Singh said, “Tibet’s global significance on a cultural and humanitarian scale is already well-known. What this timely report from the Australia Tibet Council makes clear is Tibet’s importance to the region and Australia in geo-strategic, political and environmental terms. In the context of the United Nation’s adoption of the Sustainable Development Goals and the finalisation of a new global climate agreement this year, ‘Tibet: An Environmental Challenge’ should be required reading for policy-makers and the general public alike.”