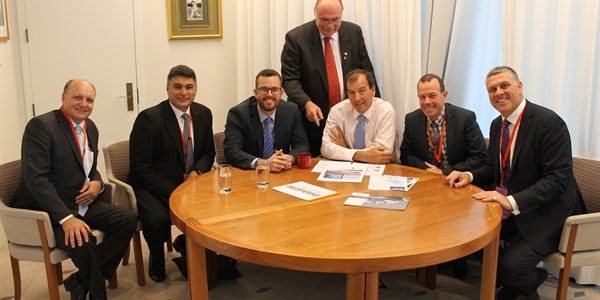 THE campaign to promote Cairns’ $2B bid to build 21 replacement Pacific Patrol Boats has ramped up, with the consortium members meeting with senior Ministers in Canberra today.

The Cairns consortium’s bid – dubbed #CairnsForTheWin – is the only tender from Queensland and Northern Australia for the build, train and maintain program, which is worth an estimated $594 million plus ongoing whole-of-life costs estimated at $1.38 billion over the next 30 years.

The consortium also includes BSE Maritime Solutions, whose facilities and staff in Cairns will build the steel-hulled vessels, Norship Marine, who will be engaged to maintain the vessels, and the Great Barrier Reef International Marine College – a first-rate training facility to support a long-term talent pipeline.

“When it comes to ship building and maintenance, quite frankly, we do it very well,” Mr Entsch said in a speech to Parliament recently.

“Cairns has the largest marine service facility north of Brisbane and more than 270 vessels have been built in Cairns, including the Fremantle class patrol boat and the hydrographic ships for the Navy – on time and on budget.

“With a tropical environment, we have a broad understanding of Pacific island issues and culture, geographical proximity to the area of operation, and a clean harbour that is not a busy mineral port.”

If successful, this bid would significantly grow local employment, diversify the Far North’s economy and boost the development of the region’s skills base. “It would also provide over 200 direct jobs in addition to indirect employment of up to 1,000 people,” Mr Entsch added.

“Not only that, but it would encourage people, including Indigenous youth, to take up apprenticeships and learn a trade, because they will be able to see that there are job opportunities for them locally.”

Mr Entsch said it was a very productive visit, with the group outlining their tender to the Minister for International Development and the Pacific Steve Ciobo and Minister for Defence Materiel Mal Brough, along with senior advisers to the Minister for Northern Australia, Josh Frydenberg, Attorney General, Senator George Brandis, and Immigration, Peter Dutton.

“This follows on from the visit last month where the #CairnsForTheWin team met with a number of Queensland MPs including the Deputy Prime Minister Warren Truss, Attorney General Senator George Brandis and then-Parliamentary Secretary for Defence Stuart Robert,” Mr Entsch said.

The MP encouraged all Queenslanders to use the hashtag #CairnsForTheWin to help raise awareness around the local bid.

“Given our focus on developing Northern Australia I think it’s entirely appropriate that we’re being parochial about this very competitive tender and arguing for more defence capital investment in FNQ.”

Mr Entsch will continue to drive awareness and support among his federal colleagues, particularly those from Queensland, and urged locals to support the bid through the following links: