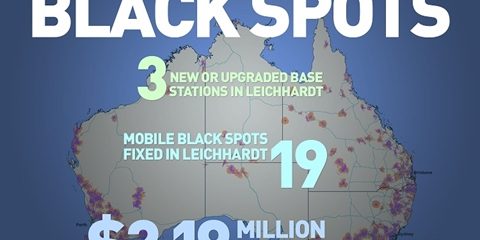 “This is a great outcome for the Far North, with a total of $2.19 million to be invested on new or improved mobile coverage in the area,” said Mr Entsch.  “Today’s announcement will see 19 mobile black spots in important tourism or industry areas receive coverage.”

The three base stations that are new or will be upgraded are at Coen Airport, Darnley Island and Speewah.  As a result, new or additional coverage will be provided to all of part of the following locations nominated as black spots, using either a mobile phone or other hand-held device, or with an external antenna attached to a vehicle:

“During the consultation phase, we heard about tourists on the Peninsula Development Road breaking down and not being able to call for help, from horse riders at Kuranda who feared for their safety if there was an accident, from cane farmers in Mossman-Whyanbeel who were isolated and operating heavy machinery yet couldn’t communicate back to base, and business owners in Speewah who failed to even get a mobile phone signal in their home office.

“It’s very good news that parts or all of these locations will now get better mobile phone reception.

“Unfortunately there are some locations that have missed out, I was hoping to see Mt Carbine included together with the Captain Cook Highway south of Oak Beach, Koah, Julatten and the more northerly and southerly sections of the PDR,” Mr Entsch said.

“I’ll continue to lobby on behalf of these sites, as well as some new ones that have been identified like Rossville – right through to the Lion’s Den Hotel – Weipa, Cape Tribulation and Cape York communities such as Lockhart River.

“Overall though this is a very good result for the first round, and it’s very promising that a further $60 million in funding has today been announced for Round 2.

“This’ll provide us with an opportunity to get feedback on the locations that weren’t successful in Round 1, and build a case for the telco’s to put in an application for these sites for Round 2.”

Mr Entsch said the Mobile Black Spot database will be reopened so members of the public can nominate further locations in outer metropolitan, regional and remote Australia which do not have mobile coverage. Nominations can be emailed to mobilecoverage@communications.gov.au

“The Government has actively encouraged the NBN and telco’s to work together and co-locate infrastructure on the NBN’s fixed wireless towers – it just makes sense,” he said. “Telstra has also committed to build 200 new 4G mini base stations to further help met unmet demand.”

Parliamentary Secretary to the Minister for Communications Paul Fletcher said that the outcome of the Mobile Black Spot Programme had significantly exceeded expectations.

“Almost 500 new or upgraded mobile base stations will be built across regional and remote Australia, covering a total of 3,000 mobile black spots from the more than 6,000 black spots nominated by the public,” Mr Fletcher said.

“Today’s announcement to invest an additional $60 million of Commonwealth funds means that the work done under the first round of the Programme – in identifying priority locations, engaging with the mobile network operators Telstra, Optus and Vodafone and other industry participants, developing guidelines for a competitive selection process, and in canvassing local councils and state governments for their support – can be leveraged to allow the next round of funding to be deployed efficiently.”

The first base stations to be funded under the Programme will begin to roll out in the second half of 2015, and the full roll out will continue over a three year period.  A map of locations which will receive new or upgraded coverage under the first round of funding under the Mobile Black Spot Programme is available from http://nationalmap.gov.au/