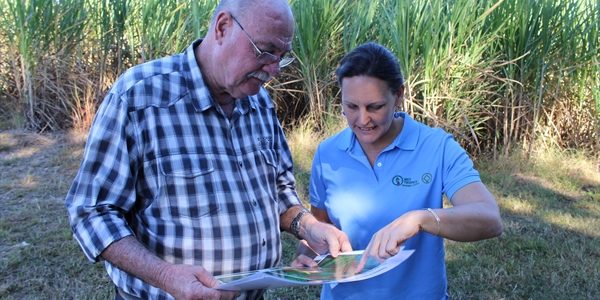 THE success of Yellow Crazy Ant eradication activities in Cairns will be shared in Canberra with Federal Leichhardt MP Warren Entsch vowing to highlight project milestones with his colleagues in a bid to secure additional funding for the program.

He commended their “absolute commitment” following WTMA’s announcement that eradication has been achieved at two sites near Cairns, with a third expected by the end of this year.

“What we’re seeing today is the helicopter going over those remnant areas of forest dropping baits very selectively, targeting these creatures which have caused horror stories in the past for residents and landholders in the area,” Mr Entsch said.

The success of the program was driven home when Lucy Karger, YCA Eradication Project Manager, told Mr Entsch that 12 months ago he would not have been able to stand in the same cane paddock without hordes of ants climbing his legs.

“When you look at the maps here today compared to 12 months ago, there are areas where these creatures are totally gone – they have been eradicated,” Mr Entsch said.

“This is not by accident – it has happened because of the absolute commitment of Lucy and her team, and the efforts of people who have come together in the community such as Frank Teodo and residents of Russett Park near Kuranda.”

Mr Entsch said the milestones being reached were in stark contrast to the situation at Christmas Island, which he visited recently as part of the Northern Australia Committee’s tourism inquiry.

“They have a major issue with these creatures at Christmas Island where they’ve decimated the native red crab population and other wildlife but they’ve decided to only aim for containment.

“That means to say these creatures will be there forever.

“Here in Cairns the team has gone for eradication and they are actually writing the rulebook on how to achieve that.

“However the best practise that is being established through this process by Lucy and her team will enable other communities to face these challenges without starting from scratch.”

Mr Entsch secured a $7.5 million, three-year funding package through the Commonwealth Government for WTMA during the 2016 election campaign (in addition to $1.3 million through broader land care activities) and this funding expires at the end of June 2019.

The MP met with WTMA Chair Leslie Shirreffs, Executive Director Scott Buchanan and Ms Karger in Cairns yesterday (MON) to discuss the project’s future needs and Mr Entsch encouraged WTMA to put together a submission that he could take to Canberra.

“There is a lot of work that has been done already, a significant amount of success, and you can see huge areas on the maps where Yellow Crazy Ants no longer exist – but there’s more to be done.

“We need to maintain momentum because you only need to miss one colony and we’ll take a massive step backwards, given the rate that these pests can overrun areas. Containment is not an option; total eradication in the Wet Tropics World Heritage Area is our goal.”