Local artist gets pride of place in Canberra 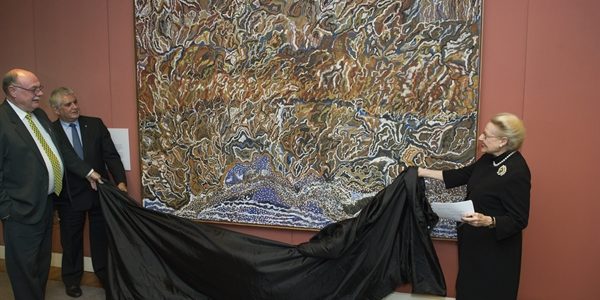 A MAJOR work by an accomplished Aurukun artist has been hung in Parliament House, bringing the vibrant colours and landscapes of the Western Cape to Australia’s capital.

The painting, Bush Fire at Ngak-Pungarichan (2013) by Mavis Ngallametta, was purchased by the Parliament House Art Collection late last year.

On Wednesday (3 June), it was officially unveiled by Leichhardt MP Warren Entsch together with the Speaker of the House of Representatives, Bronwyn Bishop MP, and Hasluck MP Ken Wyatt.

“It’s a significant achievement for an artist to have their work selected for display in Parliament House and I’m so pleased for Mavis Ngallametta,” Mr Entsch said.

“It’s a beautiful work and I was actually very honoured to take part in the unveiling, which was particularly timely being Mabo Day and Reconciliation Week.

“Mavis can be very proud – the painting has been hung in the Marble Foyer, which is the main public entrance to the Parliament, so thousands and thousands of people will be able to appreciate her work.”

Inspired by the spectacular landscape of her country, Mavis Ngallametta’s paintings depict commanding cliff formations, sinuous rivers, clay wetlands and the ancient coastline near Aurukun on the Cape York Peninsula in FNQ, where she lives and works.

Intricate bands of red bauxite earth and white clay, typical of the Western Cape landscape, are woven together like a complex maze of fishing nets, whilst the vivid blue water swirls with figurative marine life and seabirds.

Mavis is of the Wik/Kunjen peoples and is a traditional elder of the country surrounding the Kendall River region near Aurukun. She first became recognised for her traditional weaving and basketry.

“In 2013 she was the winner of the General Painting Prize in the Telstra National Aboriginal and Torres Strait Islander Art Awards, and her weavings and paintings are now held in a number of important public and private collections in Australia and around the world.

“I hope that once the weather in Canberra warms up, Mavis will come and visit Parliament House and see her painting in ‘pride of place’ – I’d love to show her around.”