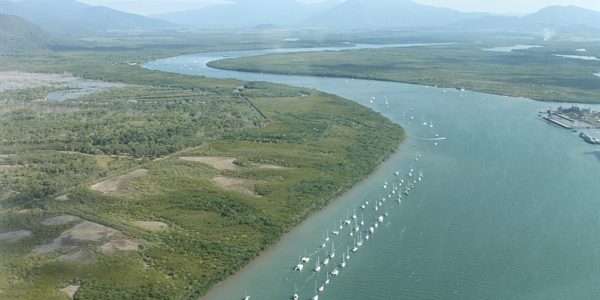 LEICHHARDT MP Warren Entsch has applauded the Government’s move to ban the dumping of any capital dredge spoil in Great Barrier Reef Marine Park waters, but says it shouldn’t be news to Ports North in regards to their Port of Cairns dredge proposal.

“I congratulate Environment Minister Greg Hunt for this decision, it’s something that I’ve been arguing for forever – even in regards to maintenance dredging going into the waters,” Mr Entsch said.

“I’ve always said that we have an obvious opportunity on East Trinity, it’s the perfect site for disposing of the dredge spoil.

“It provides us with an opportunity to bring the next stage of the development of Cairns closer to the CBD by developing a site that is only five minutes across the water.”

Mr Entsch said he couldn’t see why the option hasn’t already been factored in by Ports North.

“Greg Hunt has indicated for a long time that his preferred option for disposal is on land, and I have certainly conveyed this message to Ports North with every meeting I have had with them. So I don’t see any reasons why there would be delays as they have already considered a number of land-based options.”

Mr Entsch said it was critical that the dredging of Trinity Inlet take place.
“Just look at the expansion of the cruise ship industry, which has been phenomenal. One of the large cruise companies is looking at Cairns as a home base, but that may never happen without dredging.

“While undoubtedly a land-based option will be more expensive, what needs to be factored in is the environmental benefits of taking the pressure off hill slopes as our city grows, and the economic benefits of reducing ribbon development as we head south past Gordonvale.

“Originally the plan was for 25,000 people at East Trinity, this can be expanded further to the adjoining land west of the Yarrabah road, allowing a significant increase in our population base. It also gives us a genuine second access to Cairns and would significantly improve connectivity between the Yarrabah community and the city.”

Mr Entsch said he understood that it would be several years before any dredge spoil at the site would have settled enough to be developed.

“However there’s an opportunity to develop the adjoining areas in the meantime, and encourage private investment. The end result is that it would significantly expand capacity close to our CBD and contain the city to a much smaller footprint.

“There’s been more than enough time for EIS to be assessed. I’d urge the new Queensland Government to release it as soon as possible, so that the Cairns community can talk about the options.”