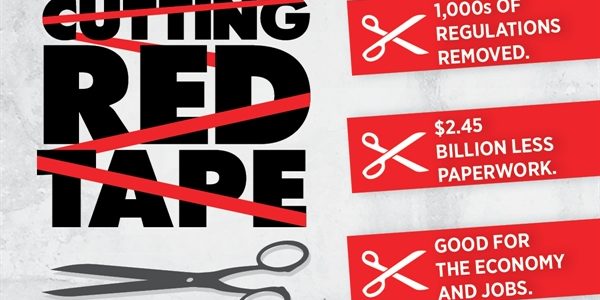 THE Coalition Government has today announced a further $305 million in red tape reduction decisions to ease the burden on Australian businesses, community organisations, families and individuals.

Warren Entsch MP, the Federal Member for Leichhardt, said the measures in the Coalition's third Repeal Day built on the $2.1 billion in red tape reduction decisions announced by the Government in October 2014.

“What this means for the businesses, community organisations, families and individuals in Leichhardt is less time filling out forms, less time waiting in queues and less time searching for government information,” Mr Entsch said.

“The Coalition set itself a target to reduce the regulatory burden by $1 billion a year. Not only did we exceed that net target by more than double in our first year, but we are now on our way to meeting a fresh new $1 billion target for 2015.”

The Coalition Government has also released the inaugural Annual Deregulation Report 2014, which sets out the achievements of the Coalition in the first year of its deregulation programme, as well as the results of the first ever stocktake and costing of all Commonwealth regulation on the Australian economy.

“In the last year of the former Labor Government, Commonwealth regulation was costing Australians approximately $65 billion per year ? a remarkable 4.2 per cent of GDP.

“Now, for the first time, a Commonwealth government has, with a very high degree of accuracy, publicly reported to Parliament a downturn in the total amount and cost of federal regulation.

“As at the Government’s third Repeal Day today, we have made decisions designed to decrease the $65 billion regulatory cost burden by $2.45 billion. To date we have implemented $1.57 billion of that $2.45 billion, with $880 million to be implemented.

“Australia now has its most precise, comprehensive and transparent programme to reverse the growing costs of red tape on the Australian economy.”

Mr Entsch said that the Coalition Government had now repealed more than 10,300 legislative instruments and introduced legislation to repeal over 2,700 Acts of Parliament.

Some of the key measures in the Autumn 2015 Repeal day include:

– Implementing additional functionality for myGov users to allow customers to update their details in one place using the myGov Tell Us Once Service to obtain secure and convenient access to online services with a single account and one set of credentials. Annual compliance savings of $5.4 million.

– Lifted restrictions on using personal electronic devices so travellers can use their PEDs during all phases of flights. Annual compliance savings of $17.7 million.

– Implementing easier monthly PAYG for certain businesses. Businesses choosing to use this new method will only need to calculate their actual instalment income on a quarterly basis. Annual compliance savings of $2.7 million.

– Reforming the 457 visa programme; streamlining the processing of sponsorship, nomination and visa applications to reduce the time and cost to businesses. Annual savings of $29.9 million.

– Students who receive government payments are now able to change their details online, at a time that best suits them, without being required to contact a call centre or attend a service centre. Annual compliance savings of $2.7 million.

– Excluding certain types of low-risk animal feed for both stock and companion animals from the need for Australian Pesticides and Veterinary Medicines Authority regulatory assessment to better align the registration requirements for stock and pet food with the well understood risks associated with their ingredients and intended use patterns. Annual compliance savings of $7.8 million.

– Developing an online national assessment platform which will deliver the National Assessment Program ? Literacy and Numeracy (NAPLAN) online. It is scheduled to be available to school staff from 2017. Annual compliance savings of $9.7 million.

“Under the Coalition Government, businesses and the community in Leichhardt will be able to get on with what they do best without being weighed down by unnecessary paperwork,” Mr Entsch said. “Importantly, they will be able to access government information and services easier and quicker.

“I want to hear from my local businesses, community organisations, families or individuals on how the Government can help cut red tape in our electorate even further to build a strong and prosperous local economy in Leichhardt.”