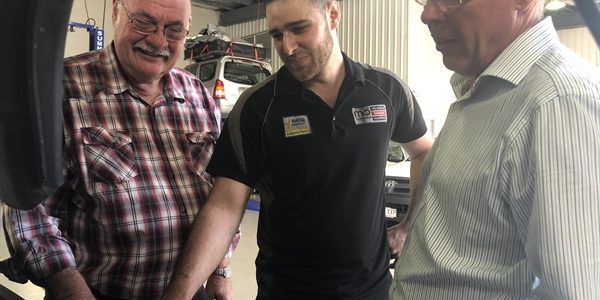 More than one million jobs have been created under the Coalition Government jobactive employment program including 9800 in Far North Queensland.

Federal Leichhardt MP Warren Entsch, who visited a local business today that had hired two previously unemployed apprentices, said the job creation milestone had seen the Cairns unemployment rate drop by a staggering 1.3 per cent over the past year.

He said today’s milestone was clear evidence that the government’s employment policies were working with more than 32,362 local people assisted under the program.

“Reaching one million job placements under jobactive shows that we are succeeding in our goal to get more Australians than ever before into work,” Mr Entsch said.

“The jobactive program is making a real difference to the lives of many people in Far North Queensland by helping them to get a foot in the door and back into work.

“I encourage any local business that is not registered with a jobactive provider to go and see them and to find out how they can get the right employee for their business and give a local an opportunity.”

Mr Entsch said it was a very exciting time for our city and region.
“For the first time in a long time the unemployment rate is moving in the right direction,” he said.

“More jobs were created across the nation last year than any calendar year on record.

“We are starting to see the significant investment in our city creating local full-time jobs. A stronger local economy is the key to creating more and better paying jobs.”

Jobs and Innovation Minister Michaelia Cash said reaching one million job placements under jobactive shows we are succeeding in our goal to get more Australians than ever before into work.

“Getting a job changes people’s lives – the jobactive program is making a real difference for many Australians,” Minister Cash said.

“Jobactive is also working well for Australian businesses who are looking to hire more staff.

“The best form of welfare is a job – I look forward to more great outcomes for Australians as a result of jobactive and our other employment programs.”