GIANT SEA SNAILS JOIN THE FIGHT TO PROTECT THE REEF 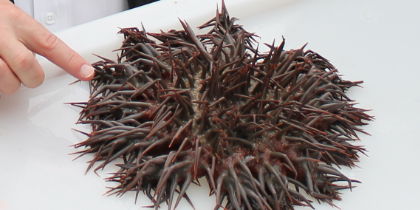 In our efforts to protect the Great Barrier Reef and building on the $27.4 million investment to support the direct management of crown-of-thorns starfish, the Turnbull Government is now turning to the starfish’s natural predator for help.

As part of its commitment under the Reef 2050 Plan, the Government is investing $568,000 towards research trials into breeding of the starfish’s feared predator – the giant triton sea snail (Charonia tritonis).

“The Turnbull Government is taking an innovative approach to managing the marine environment and tackling the big problems. This new project builds on the success of Australian Institute of Marine Science (AIMS) research which found crown-of-thorns starfish avoid an areas where triton sea snails are present,” said the Minister for the Environment and Energy, the Hon Josh Frydenberg MP.

The study, funded through the Australian Government’s Reef Program, showed that exposing crown-of-thorns starfish to triton secretomes produced an alarm response – with the starfish attempting to flee from the perceived threat. The researchers found potential for tritons to be ‘deployed’ to prevent crown-of-thorns from aggregating closely during their spawning season and this could help prevent the starfish from reaching outbreak numbers.

The giant triton is native to coral reefs in the Pacific and Indian oceans but is now extremely rare, having been hunted extensively by shell collectors. It is fully protected in Queensland waters.

“This project is another example of the Turnbull Government supporting innovative approaches to help protect one of our national treasures. A breeding program would go a long way towards helping protect an extremely vulnerable species and, possibly, managing or preventing the impact of crown-of thorns starfish outbreaks on the Reef,” said the Federal Member for Leichhardt, the Hon Warren Entsch MP.

“The possibilities the triton breeding project opens up are exciting. If successful, this research will allow scientists to closely look at the impact of giant tritons on crown-of-thorns behaviour and test their potential as a management tool to help reduce coral lost to outbreaks.”

Giant tritons held at AIMS have laid numerous egg capsules, with over 100,000 swimming larvae hatching in the last month. The research project focuses on helping triton larvae to transition to their juvenile and adult stages, providing the opportunity for further research into triton biology.

The project commenced in mid-June 2017 and will continue until June 2019.