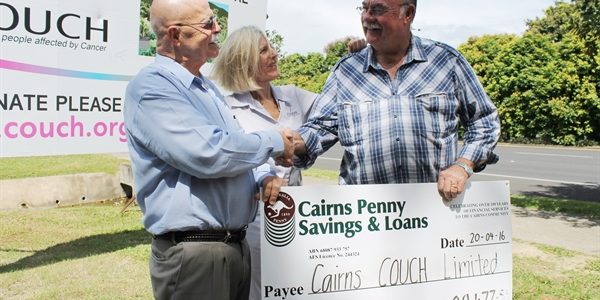 PROMINENT local charity COUCH has today been handed a cheque for almost $30,000 by Leichhardt MP Warren Entsch on behalf of the Far North Queensland community, one of the largest amounts raised for the charity at a single fundraising event.

The hand-over took place at the site of the planned Cancer Help & Wellness Centre on Reservoir Road, Manoora, land which was donated to COUCH by the Woodward Family.

Mr Entsch, handing over the $29,477.54 cheque to COUCH chairman Charlie Woodward and his wife Pip, congratulated the charity for their work to improve the cancer journey for local sufferers.

“Over the years COUCH has had so many significant achievements, including the establishment of the Liz Plummer Cancer Care Centre and fundraising for the purchase of a range of medical equipment that’s needed for the treatment of cancer,” he said.

The funds were raised at a gala event held in early March in the centre court of the Pier Shopping Centre, when Mr Entsch and more than 300 locals celebrated the 20th anniversary of his election to Federal Parliament.

“I wanted to acknowledge the milestone and express my appreciation to the many people who have supported me on this two-decade-long journey,” Mr Entsch said.

“But instead of raising funds for a political cause, I thought it was much more important to give something back to the community and COUCH – in my view – is the foremost charity in Cairns.

“I’d like to express my gratitude to all those who attended the anniversary event and helped raise these funds through auctions, raffles and donations.

Mr Entsch said the Cancer Help & Wellness Centre is going to build on COUCH’s achievements with a focus on wellbeing and a more holistic approach to health.

Located amongst the natural forest setting, the proposed facilities, treatments and services that would be provided onsite include counselling, exercise, massage, nutrition/diet, mind therapies (relaxation, meditation, yoga etc.), acupuncture, Look Good Feel Better, and other activities such as art, music and gardening therapy.