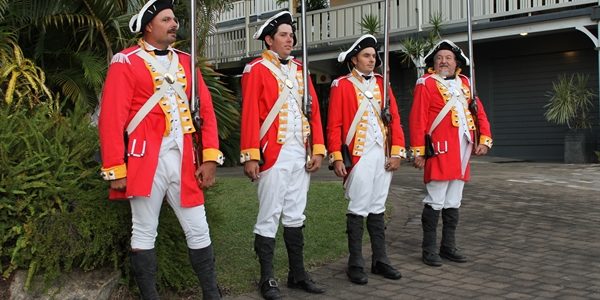 LEICHHARDT MP Warren Entsch has recognised the efforts of the Cooktown Re-enactment Association in Parliament ahead of yet another exciting Cooktown Discovery Festival this weekend.

Mr Entsch outlined the history of Cook’s voyage north with his crew on the HMB Endeavour and the subsequent foundering on the Great Barrier Reef late in the evening of 10th June 1770.

“She limped ashore and was beached in a sheltered inlet for repairs at the site which is now the vibrant regional centre of Cooktown,” Mr Entsch explained.

“There, Cook and his crew met with the local Aboriginal people, the Guugu Yimithirr, documented over 200 new species of plants and made the first recorded European sighting of one of our country's iconic emblems, the kangaroo.

“It is also acknowledged as the place where the first act of reconciliation actually occurred.

“It is a significant chapter in Australia's 40,000-year history, and one that the Cooktown Re-enactment Association is passionate about promoting. After all, if Cook's ship were unable to be repaired or had sunk, how would this have changed the course of our country's history?”

He added that he was looking forward to the launch of '48 Days of Shared History' on Friday, featuring 13 murals by the highly-talented local artist, Jane Dennis, that depict the 48 days spent by Captain Cook and his crew on the Endeavour River in 1770.

“What is great about the Cooktown re-enactment and also the festival is that there is great participation by the local Indigenous population as well as by the broader local population,” he said.

“It is a celebration for all in Cooktown, and I encourage anybody to go to Cooktown for the long weekend in June. Please jump on up. It is easy to get to, and you will have a great time.”